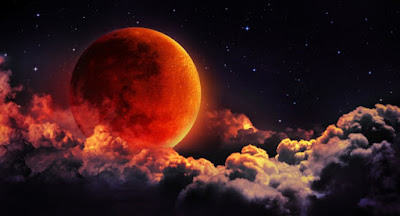 Tonight is the full moon and also a total lunar eclipse. The full moon is involved in folklore and myths.

Some media outlets call this event the “Blood Moon” Eclipse. This is an increasingly popular name used for a total lunar eclipse but is not an official, scientific term. Put simply, the fully-eclipsed Moon turns a red-orange, similar to a sunset color; with less direct sunlight hitting the Moon during the eclipse, you only see the reddish wavelengths.

For thousands of years, people have looked up at the moon and wondered about its divine significance. No surprise many cultures had lunar deities - that is, gods or goddesses associated with the power and energy of the moon. If you're doing a moon-related ritual, in some traditions of Wicca and Paganism you may choose to call upon one of these deities for assistance.

Alignak is the god of both the moon and weather. He controls the tides, besides also earthquakes and eclipses. In some stories, it is told that he is also responsible for returning the souls of the dead to earth so that they may be reborn. Alignak may appear in harbors to protect fishermen from Sedna, the wrathful sea goddess.

Artemis is the Greek goddess of the hunt. As her twin brother, Apollo, was associated with the Sun, Artemis became connected to the moon in the post-Classical world. During the ancient Greek period, although Artemis was represented as a lunar goddess, she never gotten portrayed as the moon itself. In post-Classical artwork, she is depicted beside a crescent moon and is often associated with the Roman Diana as well. Like Artemis, Diana began as a goddess of the hunt who later evolved into a lunar goddess.

Cerridwen is the keeper of the cauldron of knowledge in Celtic mythology. Besides the giver of wisdom and inspiration, she is often associated with the moon and the intuitive process. As a goddess of the Underworld, Cerridwen is often symbolized by a white sow, which represents both her fecundity and fertility and her strength as a mother. She is both Mother and Crone; many modern Pagans honor Cerridwen for her close association to the full moon.

The moon seems to have an effect on animals as well as people. A Florida expert on animal behavior reports that hamsters spin in their wheels far more aggressively during the moon's full phase. Deer and other herbivores in the wild tend to ovulate at the full moon, and in Australia's Great Barrier Reef, the full moon is mating time for coral. Werecoral?

The Strange Case of Dr. Jekyll and Mr. Hyde, by Robert Louis Stevenson, was inspired by the strange -- and yet very true -- the case of Charles Hyde, a London man who committed a series of crimes at the time of the full moon. 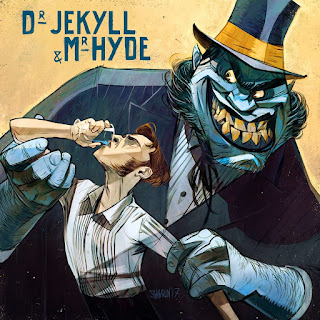 There are those who say weather & atmospheric conditions influence paranormal investigating by the amount of lighting, giving the investigator an advantage during full moons. Magnetic fields are said to be strangest around full and new moons. It is popular belief that a good time to ghost hunt is 2-3 days prior; the day of; or 2-3 days after a full moon & new moon. The best times for ghost hunting would also be during peak geomagnetic fields & solar storms. There is also a common theory that "psychic tendencies" increase during new & full moons.

In folklore, there are many myths concerning full moons and Friday the 13 that have led to superstitions surrounding the full moon. An ancient Babylonian manuscript prescribes that women are more fertile during a full moon. Many women today believe that their menstrual cycles correspond to the moon. There are stories that more women go into labor during the full moon. This belief has not been confirmed by scientific studies. In ancient Greece, Diana the Goddess of the Hunt was associated with both the moon and childbirth, demonstrating that this is an ancient association held by humans for centuries. 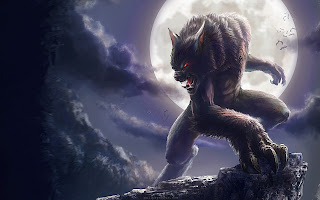 The most common myth surrounding the full moon is that it evokes madness. The word “lunacy” stems from the root “lunar.” From werewolves to myths about a higher rate of insanity homicide, and suicide, lunacy affected by the full moon appears frequently in old folklore.  There is no significant relationship between the full moon and insane or anti-social behavior though. Because the moon is such a powerful astronomical force that affects the earth’s tides and allows humans to track their lives according to a lunar monthly cycle, these kinds of superstitions about the full moon is still popular.

It is believed that the fifth day after a full moon is the perfect time to try to conceive a child.

Offerings are made to the ancestors on the night of a full moon in some Chinese tales.

Those careless enough to sleep under a full moon risked insanity, blindness, or even being turned into a werewolf (but only if it happened to be a Friday night).

Pointing at the moon has been considered unlucky. Some say that the “man in the moon” residing there, considers it rude. A superstition from the British Isles says that anyone who points at the moon nine times cannot enter heaven, no matter how pious he or she has been.

It was believed in ancient times, that moon’s silvery glow was made of silver. That is the reason the metal became one of its symbols.

The next time you check out a full moon, or even the lunar eclipse if you are in the area it will show, think of all the myths and legends concerning the full moon. And if you hear a howl, it might nit be the neighbor's dog.....

The night of the full moon is believed to be a good time for divination and scrying, so if you want to find some things out, a good time to do so.
Posted by Pamela K. Kinney at 12:00 PM No comments:

Supernatural Friday: A Basket of Thirteens for You-Friday the 13th!

With me working on edits sent by the editor for my short story that was accepted for a fairy fantasy anthology and other stuff, no time today to write a blog post. So, since it is Friday the 13th today, here is repost from April 13th. 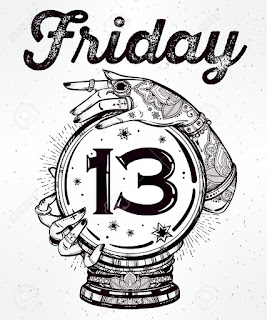 There’s nothing more invigorating on this day than a basket of 13 black cats. Right?

For many reasons, people feel Friday then 13th is a day of bad luck. Not so for me, 13 is my lucky number. Over the years, I've won prizes and money with this number. Heck, I own a black cat!

2018 has double the trouble as Friday the 13th happens today again.
The fear of Friday the 13th is called paraskavedekatriaphobia, a word derived from the concatenation of the Greek words Paraskeví (Παρασκευή) (meaning Friday), and dekatreís (δεκατρείς) (meaning thirteen), attached to phobía (φοβία) (meaning fear). The term is a specialized form of triskaidekaphobia, a simple phobia (fear) of the number thirteen appearing in any case.
Both the number thirteen and Friday have been considered unlucky:
In numerology, the number twelve is considered the number of completeness, as reflected in the twelve months of the year, twelve recognized signs of the zodiac, the twelve tribes of Israel, the twelve Apostles of Jesus, etc., whereas the number thirteen was considered irregular, transgressing this completeness. There is also a superstition, thought by some to derive from the Last Supper, that having thirteen people seated at a table will result in the death of one of the diners.

Friday, as the day on which Jesus Christ was crucified, has been viewed both positively and negatively among Christians. The actual day of Crucifixion was the 14th day of Nisan in the Hebrew Lunar calendar which does not correspond to "Friday" in the solar calendar of Rome. The 15th day of Nissan (beginning at Sundown) is a celebration of Passover.
In the 20th century, only did the superstition receive a greater audience, as Friday the 13th doesn't even merit a mention in E. Cobham Brewer's voluminous 1898 edition of the Dictionary of Phrase and Fable, though one does find entries for "Friday, an Unlucky Day" and "Thirteen Unlucky." When the date of ill fate finally does make an appearance in later editions of the text, it is without extravagant claims as to the superstition's historicity or longevity. Though the superstition developed relatively recently, much older origins are often claimed for it, most notably in the novel, The Da Vinci Code (and later the film), which traced the belief to the arrest of the Knights Templar on Friday, October 13, 1307.

Friday the 13th has for years been considered a day to watch out for. A study done in 1993, by authors in the British Medical Journal have proven more car accidents are higher on the 13th than on normal Fridays.

Both the number 13 and the sixth day of the week have foreboding reputations since ancient times. Those who fear something bad will happen on the 13th, will not go to work, eat, etc...

The number 13 is also connected with a legend. It is said, that if thirteen people sit down to dinner, one of them will die within the year. Many cities do not have a 13th Street or Avenue. There are buildings without a thirteen floor. Having thirteen letters in your name means you will have the devil's luck. People with 13 letters include Jack the Ripper, Jeffrey Dahmer, Charles Manson, Theodore Bundy, Albert De Slavo, to name a few.

Turks have a dislike so much for the number that it is almost stricken from their vocabulary. And of course, everyone knows there are thirteen witches in a coven!

To give the argument from the other side: Chinese consider the number to be a sign of luck. Egyptians used this for spiritual ascension--twelve in their life and thirteenth beyond, meant to be eternal afterlife.

It is thought that western civilization reviled the number as it is considered feminine--used by prehistoric goddess-worshipping cultures. It corresponded to the lunar (menstrual) cycles in a year.

Millions of Americans have a fear of Friday the 13th in this day and age. It has been proven that the number of hospital admissions due to vehicular accidents was significantly higher than on "normal" Fridays. Does it keep most of them from venturing out to work and more? No. Though I wouldn't be surprised if they carry a rabbit's foot in their purse or pocket or something that they believe is lucky for them.
What plans are you making to do today for the 13th--stay home safe and sound or go out as usual? Do you believe in the 13th being an unlucky day or not? Thirteen is just a number--right? It's just another day.

Posted by Pamela K. Kinney at 4:29 PM No comments: