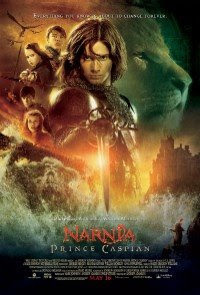 I went and saw "The Chronicles of Narnia: Prince Caspian" alone on Friday, May 16th. After dropping my son off at work, I rsuhed over to the Commonwealth 20 Theater, now owned by Regal Cinemas. The theater was filled, but lucky for me, the seat I usually get waited for me, vacant.

I loved it. Darker and even better than the first one, with ferocious battle scenes, and may I say, Ben Barnes as Caspian made my heart beat. Caspian is the latest royal descended of Tumerians who came and conquered Narnia not long after the 'four kings and queens of old' return back to 1940s England. He had grown up on stories of the magic of Narnia at his tutor's knee. And not long after his father's death, his tutor helps him to escape as it became apparent that after the birth of his own son, Caspian's uncle has plans to kill him and take the throne. Caspian takes the horn that Susan left behind and blows on it to call them. The four children, Susan, Lucy, Edmund, and Peter return to find a Narnia a thousand years in the future. They help the Narnians who have been hiding all this time and Caspian to defeat bis uncle.

If you have younger children who may be frightened, then I would suggest the parents go and view it first to see if thior child can handle it. Like I said earlier, it is much darker and more older in tone. The battle scenes are intense and the visuals are spectacular. I can't wait for the third one.

I give this film 5 dragons.

I enjoyed the movie overall, but Narnia purists may not. There was a lot of poetic license taken with the book, but IMHO, it may have changed it, but not for the worse.

If you have never read the books, you will definitely enjoy the movie because the story was great and as you said, the effects were spectacular. The River spirit was totally awesome and I think my favorite part.

And Ben Barnes was pretty hot. You're right about that! LOL

My DH and i saw it this afternoon. You're totally right. Prince Caspian was a good character.

A few things were changed from the book but that is to be expected and I had no problem with the changes they made.

I really like Peter and Susan and will miss them in the third film. It's amazing how much Lucy and Edmund have grown up.

Any fan of the books must see it but I agree with the small children issue. I was surprised to see so many small, small children. I personally thought it was too violent for any child under 10.

5 DRAGONS, to be sure! My 8 y/o had no problems with it, and she did have problems with the crows in THE DARK IS RISING, as well as other intense movie scenes. So, I doubt you're going to have much of a problem with little ones, if they've seen this type of movie before.

They changed a few things, of course...always do, but nothing that can't be forgiven. Overall, it was a fantastic movie. The addition of the romance between Caspian and Susan was actually well done...yeah, that's new.

My son and I were at the first showing in our local theater and we also loved the movie. We've also read all the books.

Hello, can't wait for it to open in my hometown. My kids loved the first one and don't think they will have a problem with the violence as they are veterans of Harry Potter, Lord of the Rings and Star Wars. :-) great rewiew and w/o telling the ending. Hehehe

The name Ben Barnes is new to me, can you tell me if he has appeared in anything else?