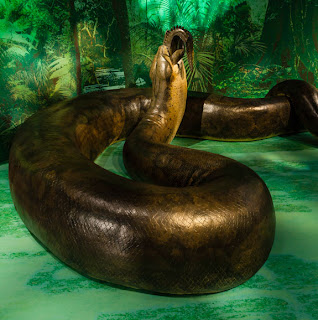 Once again it’s all about monsters. Last Friday, I blogged about Bigfoot, werewolves and Mothman. Today it’ll be about giant snakes seen in places they should not be seen outside of the jungles of South America and Africa—like in and more.

It has been found recently that a species of really giant snake they named Titanoboa from 58 million years ago. Weighing more than a ton and measuring 14m (approximately 50ft) the giant reptile could swallow a whole crocodile without showing a bulge. But a few years ago, scientists never even knew it existed. It was thought to be a distant relative of the anaconda and boa constrictor, except it was not venomous. Instead, it crushed its prey with the constricting force of 400lbs per square inch. That’s equivalent of lying under the weight of one and a half times the .


Fossils exposed by excavation at the massive Cerrejon open-face coal mine in northern Colombia in 2002, scientists discovered at that site the remains of a tropical rainforest from the Palaeocene Epoch - perhaps the planet's first. Not only the snake, but many extremely large reptiles were found. Like turtles the size of a kitchen table and the biggest crocodiles ever dug up, eclipsing past fossil records. They also found the vertebrae of a colossal snake. One of the few snakes to make iinto fossil records due to being so big, that not only a vertebrae found, but three snake skulls, so that scientists could determine how really large this reptile was. It was found to be the biggest predator after extinction of the dinosaurs! To view how big it was, a life-sized replica is now on display at the in , and will begin a nationwide tour in 2013. 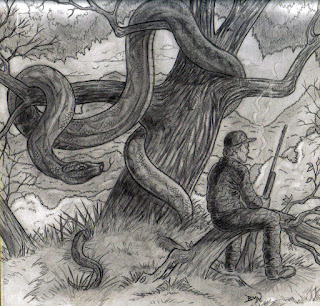 So snakes double the size of constrictors and anacondas today existed once upon a time. Scientists felt that warmer temperatures after the dinosaurs were wiped out caused this. Maybe not this gigantic as snakes seen in movies on SyFy Channel, still have giant snakes been seen? Like the 55-foot snakes seen in , where the photo of it has been seen on the Internet. The snake was one of two that were awakened by local workers digging up huge mounds of earth in preparation for a new road that was to cut through the forest that lay just outside of Gupiing city in the Chinese .


While one snake, which was reported to be 55-feet long and weigh approximately 300kg, became a casualty of the bulldozers digging, another one, described as a gold boa, appeared supposedly bearing its fangs, causing the workers to flee in terror.


The driver of the bulldozer, however, is said to have been paralyzed with fear. When the workers returned, he was so sick he could barely move, and eventually died at the hospital, presumably of a heart attack.


Despite the story and the accompanying photo, the local government has deemed it all a hoax, due in part to the distinct lack of native boas in that area. It was also thought the coelacanth was extinct until one was discovered in 1938, so to completely dismiss the story as a hoax is to laugh in the face of just how darned scary and unpredictable nature can be. 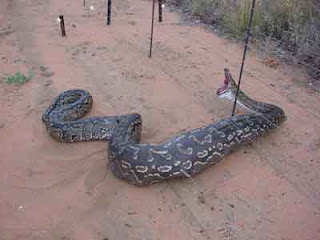 But big snake stories in the US have been almost proven true. Rarely does one consider imported snakes, sold through pet stores as problem species for . But in Florida where now constrictors and pythons live wild and free, thanks to escaping during hurricanes hitting Florida, these kind of snakes are threatening Florida’s wilds like the Everglades. Also, pet owners release the snakes into the wild once the snakes become too big. These include Burmese Pythons, Reticulated Pythons, Yellow Anacondas, Anacondas, Green Anacondas, and Deschauensee's anacondas. It is believed that there could be up to tens of thousands of pythons in . The snakes have become the most sensational invasive species plaguing . The snakes adapted quite well to Florida's climate, and the Everglades provides a bountiful source of food.

Burmese Pythons, in the right conditions, grow very quickly. They are usually an easy-going snake in temperament, making them a favorite for pet owners. Among the largest snakes on earth, they are able to grow up to 23 feet long and weighing 200 pounds in normal circumstances. Burmese Pythons are a threatened species in their native habitat. 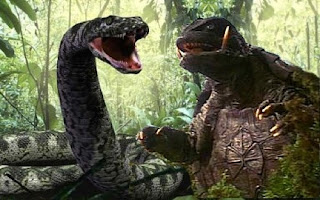 Snakes that reach these sizes can present a risk to humans as well, although humans are not normally part of the diet of a giant snake. While rare, Burmese Pythons are capable of killing people. Earlier this year, a two-year old in was strangled by a pet Python. In 1996, a 19-year old man was killed by his pet Burmese Python. Shades of SyFy monster moives, Florida's problems with giant snakes came to light years ago after tourists witnessed epic battles between giant snakes and alligators. Not alone in this problem, is having same problem with Burmese Pythons that were let loose or escaped.
From 1919 through more recent sightings in 1975, a forty-foot snake is claimed to be seen on the slopes of . There are reports from 2007 of a small serpent by comparison in , . It was a 9-foot-long snake said to be on the loose, reportedly eating several kittens. The Giant Snake has yet to be captured.


One of the most famous Giant Snake sighting series from the ’s Midwest was that of the “Peninsula Python” in , in 1944. The media attention of this new wave of sightings in 2007, in , may soon rival the hysteria of the “ Python,” during the modern age of the Internet. Though chances That the 2007 one is based on an escaped pet.


Another place that a snake has been seen is Devil’s Den” in . This place is famous for the event that caused the lore and legend of the Devil’s Den is undoubtedly the fighting which took place here on July 2, 1863, the second day of the of . According to early accounts from the area, the tangled, outcropping of rocks was a Native American hunting ground for centuries and some say that a huge battle was once fought here, called the "Battle of the Crows" during which many perished. Early settlers had told stories of ghosts seen there and Indian "war-whoops" heard on certain nights. It was also reported that strange Indian ceremonies also took place in the area. According to local legend, the name "Devil’s Den" was actually in use before the Civil War battle took place. How the area got its name remains a mystery, though many believe that the strange atmosphere of the area itself may have contributed to the designation. There was another legend persists that the Devil’s Den was always known for being infested with snakes. It is said that one gigantic black snake in particular eluded the local hunters for many years and they were never able to capture or kill him. He was allegedly nicknamed "the Devil" and thus, the area of rocks was called his "den". After the Civil War battle that happened there and all the deaths, apparitions have been seen. So not only a giant snake, but ghosts, too.


Are these pets that escaped, where some sizes were magnified, actual giant snakes?  Or the imagination of those deluding themselves due to alcohol or drugs? Good question. No matter what one’s opinion is, it’s still fascinating to wonder if giant snakes live among us, ready to devour us at a moment’s notice. If nothing else, good fodder to tell around a campfire at night to other campers. Just be forewarned; what else is sharing the woods with you? And did you hear that hiss in the darkness beyond the trees, or is it only your imagination? 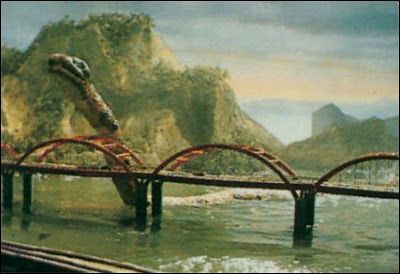 I just saw the exhibit at the Smithsonian last week! Big ass snake!

I want to go up to DC and see tbis at the Smithsonian, Sharon.

Great blog! Some fab pics too! Really enjoyed the read. :)

You're right about the snakes proliferating in the Everglades. I don't live far from there, and you won't catch me exploring. Eww, I hate snakes of any size. As for myths and what's real, I researched giant jellyfish for my upcoming Drift Lords series. They are real and live off the coast of Japan.