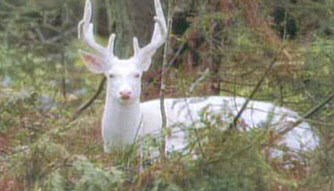 The Senecas of Northwestern New York State have their White Deer legend.
The Indian legend of Mona-sha-sha lends an air of tragedy to the beautiful glen with the famous waterfalls. The hunter, Joninedah, brought his wife and child to a temporary home there as the hunting was good. Instead though, days of hunting brought no success. Mona-sha-sha tried to cheer him up. She fished and gathered berries while he was away. After a long hard day, he came home in despair that the evil eye was upon him. He failed to respond to the smiles of Mona-sha-sha. Feeling that he no longer loved her, she waited until he fell asleep, then strapping her babe upon her back, slipped away into the night. Far above the falls she found her canoe, and as she rowed downstream, was dashed over the waterfall bark.
Joninedah awoke and found her gone.  He hurried outside. Following her trail to the water's edge, he found canoe gone. A white doe and fawn darted by just then.  The grief-stricken brave said the spirit had spoke of the dead. Plunging his knife into his breast, he joined his wife and child in death.

First European settlers of the lost colony of Roanoke Island in North Carolina were involved in a Croatan Indian legend. The first white child born in America was Virginia Dare. Some time before she became three years old, she and her parents and everybody in the settlement disappeared. What happened to them? Nobody knows, and they are called the "Lost Colony".
The legend of the white deer offers an explanation about Virginia Dare and why there’s a big, big grape vine called the "Mother Vine" in North Carolina.
The legend mentioned that the Lost Colony joined the Croatan Indians. When Virginia became a young woman, two Indians fell in love with her. Their names were Chico, an old Indian magician, and Okisko, a young man.
Chico said, "I am too old and she will not marry me. But she will not marry Chico, either. I will make some magic."
So Chico took magically spotted pearls from some mussels. He made a magic potion and then, sang to all the spotted beads. With the magic, he made a necklace. Chico asked Virginia, "Winono-ska, will you ride in my canoe to Roanoke Island?"
Virginia Dare agreed. Chico gave her the magic beads and when she put them on she changed into a white deer.
For a long time the people on Roanoke Island saw this white deer. The young Indian man Wanchese decided he would kill the white deer. Upset, Chico knew he had to save her. So he went to the spirit of the water. The spirit told him how to make a magic arrow from a hammerhead shark's tooth and three mussel pearls. He fixed them on a wood stick shaft and wrapped a heron feather.
Chico went to Roanoke, but Wanchese went too. They looked for the white deer. Both Indians shot arrows at the same time. Chico's arrow hit first, and the white deer changed into Virginia Dare. But Wanchese's arrow hit her just a second later, killing her.
Upset, Chico took his magic arrow and stuck it in the magic water. From the wood grew a grape vine, becoming the great Mother Vine of North Carolina.
And there are people who still say you can still see the ghost of the white deer on Roanoke Island.

And the Chickasaw of Oklahoma tell their version:
There was one brave, young warrior called Blue Jay for the Chickasaw Nation, and he fell in love with the daughter of a chief. The chief did not like the young man. So the chief invented a price for the bride that he was sure that Blue Jay couldn’t pay.
The hide of the White Deer was his price. The Chickasaws believed that animals that were all white were magical.  The chief knew that an all white deer, an albino, was very rare and would be very hard to find. White deerskin was the best material to use in a wedding dress, and the best white deer skin came from the albino deer.
Blue Jay went to his beloved, Bright Moon. "I will return with your bride price in one moon, and we will be married. I promise you." After he grabbed his best bow and his sharpest arrows, Blue Jay went hunting.
Three weeks went by, and Blue Jay was often hungry, lonely, and scratched by briars. But one night during a full moon, Blue Jay saw a white deer that seemed to drift through the moonlight. When the deer drew close to where Blue Jay hid, he shot his sharpest arrow at the buck. The arrow sank deep into the deer's heart. Instead of sinking to its knees to die, the deer bolted. It didn’t run away, but rushed toward Blue Jay, red eyes glowing and pointing the antlers in a menacing way.
A month passed, and still Blue Jay did not return as he had promised Bright Moon. The months dragged by and the tribe decided that he would never return.
But Bright Moon never took any other young man as a husband, for she had a secret. When the moon shone as bright as her name, Bright Moon often saw a white buck in the smoke of the campfire, running, and an arrow in his heart. She lived hoping the deer would finally fall, and Blue Jay would return to her.

Southeastern Virginia has its own version pf this legend. Set in the Great Dismal Swamp of the Tidewater region, it's one of tragic love. There had been an Indian maiden, Wa-Cheagles, who happened to be daughter of the chief of one of two warring tribes in the area. For years she had an interesting relationship with a doe that she called Cin-Co, which meant guiding friend. It was believed that Cin-Co brought deer into the swamp each autumn. The doe would always lead her current fawn up to Wa-Cheagles to show her, at the edge of the forest near a pool of dark brown water. This was the only way for the squaw to meet with the doe as squaws were not allowed into the forest because the tribes believed this to be an evil omen.


One year, Cin-Co appeared alone, limping. She walked back into the forest, doing it two to three times, until Wa-Cheagles overcame her fear and followed her. The doe lead her to her fawn that had a hoof firmly on a barely living rattlesnake. No doubt this reptile had bitten Cin-Co and was the reason for her limp. The doe was telling the Indian maiden she wanted her to care for her fawn, since the doe was dying from the rattlesnake poison. While there, Wa-Cheagles heard a moan and discovered an Indian brave from an enemy tribe with a swollen leg from a rattlesnake bite. If she attended to him, she must pledge herself to him. Both then would be hunted down, to be killed by arrows with tips laced with water moccasin venom.
But she went ahead and helped him, removing her beret and tying it around his leg.  Using some snakeroot she found, she applied a poultice over the wound. Ready to leave, she saw that Cin-Co had died and the fawn had vanished. Upset, she went back to her tribe.
For three days, she would sneaked away to tend to the brave. On the third day, her father appeared in the clearing, finding not only her, but the brave too. He carried away Cin-Co’s carcass, giving them enough time to get away.
Wa-Cheagles and her lover stopped at Lake Drummond to rest. Just then three warriors from her tribe confronted them, determined to erase the curse from their tribe.
As the warriors drew back their bows to send their arrows flying, a dark cloud blotted out the sun and a loud rustling noise filled the air. A flock of wild geese flew around Wa-Cheagles and her lover. The geese settled en masse on the lake until not one inch of the water could be seen. Terrified, the braves dropped their bows and arrows and bolted.
Just then, the “swamp spirit” rose out of the lake and strolled over the backs of the geese, approaching the two lovers. It told them that Cin-Co’s spirit had saved them. That Wa-Cheagles must continue the doe’s good work. The spirit magicked the maiden into a white deer, a small crimson spot on her forehead. Her lover became a charmed hunter. The spirit told them they would roam the swamp’s forest forever, side by side, protected from both animals and hunters by rattlesnakes.
To this day there are hunters and others who say they have seen the white deer and the Indian brave by her side. Whenever a hunter pursues them, a rattlesnake appears on the spot they had been sighted, hissing and rattling its rattle. 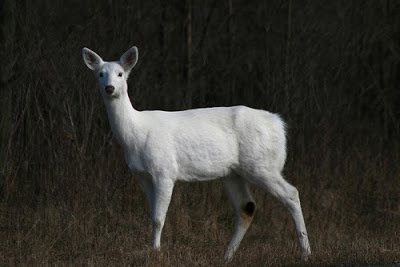 An excellent artilce. Enjoyed reading it. Another animal significant to our Native Americans is the white buffalo.

my son 16yrs old was murdered on 9-12-04, on 9-12-14. a white doe came to our house. I was able to take pictures of her, an hour later when my husband woke up I showed him the pics, he got his coffee and walked out on the deck, I heard him say shes still here, I walked out and stood beside my husband. the doe was standing there staring at us for a couple of mins then walked away. the thought that was the spirit of my son telling us he was ok was a real comfort to me.