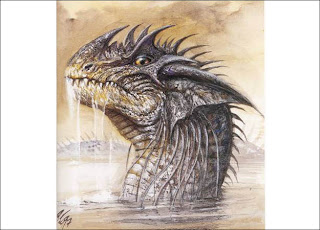 For your reading pleasure on Supernatural Friday, I offer an original story. Please do not copy and paste it elsewhere, as it is copyrighted to me. If wish to tell others about it share the link. Thank you.

Every Child Needs a Pet
By
Pamela K. Kinney


The little boy, John took what remained of his hot dog and fries to the edge of the pier and threw it all into the water below. An old man who’d been fishing nearby snatched him by the arm and brought him over to his mother. She was busy texting someone on her Smartphone.
“Madam, if you would quit texting or playing a game or whatever you are doing on that damn phone of yours, you might have noticed your child tossing his lunch into the ocean.”
She looked up with a frown. The man pressed his face closer.
“Hello, lady? Did you hear me? Your son just polluted the sea.”
“He didn’t pollute anything. John was just feeding his new pet. Every child needs a pet, and his father—God rest his soul—and I found this one when we all came on vacation here last summer.” ” She returned to the screen and began tap-tapping again. The sound grew louder, even overshadowing the nearby scream of gulls.
This infuriated the old man. He knew people were rude nowadays. No wonder her son did what he did. No supervision or morals from a mother who thought more of her phone than what her kid did.. He let go of the boy and grabbed the hand holding the phone.
“It’s people like you who have their kids grow up to shoot innocents at schools and theaters. Too busy with their Twitter and Facebook accounts to give their children the time of day or keep them from getting into mischief. In my day—”
The mother blew through her nose in irritation. “—you walked to school for miles, played outdoors and helped your mother around the house. Yeah, I’ve heard it before.” She slipped her phone into the purse propped against her thigh. “John, can you show the nice man your pet? You can even feed him.”
The boy wiggled with excitement as his eyes danced. “Wanna see my pet? Levi’s cool.”
The old man looked around. “Levi? I don’t see any dog.”
“Oh, Levi’s not a dog,” said John with a giggle. “Come on. Mama’s right. I know Levi is still hungry.”
The old man followed him to the edge of the pier. The boy pointed down at the water. “Levi lives down there.”
The old man peered over down, looking perplexed. “Are you trying to tell me your pet is a fish or a dolphin? And what are you going to feed it?”
Something arose from the ocean, sea water raining off its dark green scaly skin and the massive twin horns that sprouted from the top of its gigantic head. It stared at the man and opened a giant maw of frighteningly sharp fangs. The old man tried to screamed but found he couldn’t. He couldn’t move either, just stood there like a statue. A hot wetness on his pants at the juncture of his thighs told him he had peed. He felt ready to shit his pants too.
A forked tongue whipped out and snaked around the man. It sucked back in. The jaws snapped shut. The monster sank back into the water.
John skipped back to his mother. “Mama, Levi was fed.”
The mother smiled. “Isn’t Leviathan the best pet ever? Better than that dog or cat you wanted. And he’s easy to feed too. He even stopped Daddy from hitting and screaming at us like he kept doing all the time. With all of that nice insurance we got for Daddy, we were able to buy a house right near here so you can be near your pet, too.” She stared down at the phone’s screen and began to text her sister. “Now go and play with Leviathan.”
John laughed as he headed off the pier and down to the beach beneath.
John’s mother typed: Leviathan ate another person today. LOL. Such a perfect pet for John.