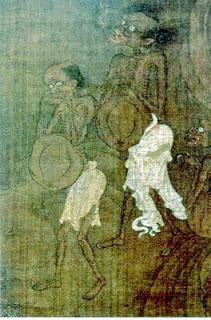 The first time I heard of this came from one of those paranormal shows. I can not remember which one, but this family that moved into this house in China as the father got transferred to a job there began having frightening occurrences. I think they had to ‘feed’ the ghosts to exorcise them. 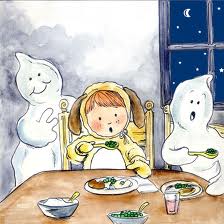 Now ghosts are only souls of those who passed on. I assume they would be beyond the need for physical things, like eating. But in China and nearby Asian countries, it appears not. Hungry ghosts are believed to be those who in their former lives were given to jealousy or greed - and have, therefore, been reborn into one of the lower of the six realms of Buddhism. These creatures have voracious appetites, but are able to eat little or nothing. 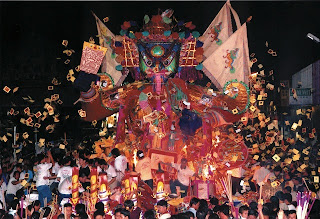 The Hungry Ghost Festival, also known as the Zhongyuan Festival is one of four traditional festivals in China to worship ancestors. The other three are the Spring Festival, the Qingming Festival, and the Double Ninth Festival. The Taoist name for the Hungry Ghost Festival is the Zhongyuan Festival, and Buddhists call it the Yulanpen Festival. It is celebrated on August 20th of the seventh lunar month. The full moon is usually at this time. The Hungry Ghost Festival is one of the important days of Ghost Month. They believe that the ghosts of ancestors are let out of hell on the first day of the month was August 7th this year), so by the 15th day (when there is a full moon) they are very hungry. So people traditionally prepare a meal for them, burn incense or pray to them on Hungry Ghost Festival day. It is believed that their ancestors pay visits especially on this day of the full moon, and for two weeks of mundane activity afterwards, the phantoms are famished, tired, and perhaps angry, so the living must worship their ancestors. Not unlike Mexico’s Day of the Dead. 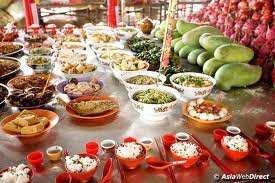 The ceremony is usually held at dusk, and people put the family’s ancestral tablets on a table, then burn incense and prepare food three times a day. Plates of food are put out for the ghosts on the table, and the people kowtow and pray in front of the memorial tablets in hopes that their ancestors bless them. People also feast on this night, and even leaving a place open at the table for their lost ancestors.

It is also thought that some of these wandering ghosts (also called ‘good brothers’) are believed to be the spirits of those with no relatives to venerate them after their death or those who had a bad death or did not receive a proper burial.

It is celebrated by some on the 14th day of the seventh lunar month or August 13th, in South China. The people in South China are said to have celebrated the festival a day earlier to avoid being caught by enemies at a time when there was a lot of warfare. In Jiangxi Province and Hunan Province, the Hungry Ghost Festival is considered to be more important than the Qingming Festival and the Double Ninth Festival.


Ghost Festival in Other Countries:

Vietnam: The Vietnamese view this festival as a time when spirits are pardoned and released from hell. Appeasement is made to homeless spirits by offering food. This festival occurs at the same time as the Buddhist Vu Lan. Vu Lan has become a time to honor and thank living mothers; those without living mothers attend services to pray for the dead. 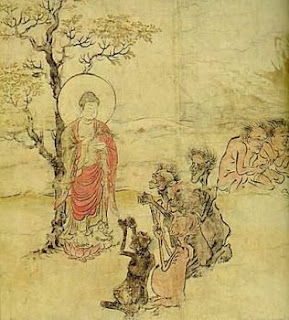 Japan: Japanese Buddhists celebrate a similar festival called O-bon or Bon—the Day of the Dead. Over the centuries, this celebration evolved into a time of family reunions when those who live in the cities return to the towns of their ancestors to visit and clean family graves.

Ghosts in Taiwan: Cut off from the mainland since 1949, Taiwan gives the clearest picture of what Chinese spirituality was like before the rise of a Communist government zealous to remove religion and superstition. Ghost Month is a major spiritual event for the Taiwanese. Up to 90% of the population of Taiwan believes in ghosts. Dealing with ghosts is big business there. Experts in the afterlife advise distressed clients on how to appease angry ancestors. Ghost-busting in Taiwan isn’t comedy—it is serious business. Taiwanese do their best to protect themselves from ghost-encounters, avoiding mountains and swimming at night or wearing a temple talisman with a protective prayer.

There are still hauntings by ghosts reported though. One woman tells of the ghost of her mother who visits her in the middle of the night, demanding money. Another concerns a teenager who claims a ghost has slept on him so that he couldn’t move. He now keeps his windows and doors locked all year to keep out the ghosts. Though anything that can walk through walls, well…

The seventh month is the scariest month of the year for the Chinese, due to the ghosts being released from hell. These evil ghosts go looking for entertainment. Many people avoid dangerous activities at night such as swimming (because it is said ghosts inhabit water) or being out alone. It is thought that the ghosts may attack their enemies or be angry or malicious. Because of fear of ghosts, many activities are curtailed during Ghost Month. Whistling is avoided as it will draw ghosts to one’s home. Events such as traveling, moving to a new home, medical procedures, or weddings are scheduled for other months; special plans and business deals are avoided at this time.

The Chinese have certain traditions what to do about the situation on the first, 14th, 15th, and also on the last day of the seventh lunar month. To fight off the ghosts, people burn fake paper money outside of their homes, businesses, along the sides of roads, or in fields on the first day, or even head to temples to do this. There is the explanation that the ghosts need money to use. They light incense and may make sacrifices of food, to appease these hungry, unhappy ghosts. There is the thought that the ghosts will not bring bad luck after eating their sacrifices. Red painted paper lanterns are found everywhere, including business and residential areas. Street ceremonies, market ceremonies, and temple ceremonies are held. During street and market ceremonies, people gather to celebrate the festival. For the temple ceremonies, monks in temples organize the festive activities.

The end of ghost month falls on the last day of the seventh lunar month. This year it is September 4th. The last day of the month is when the gates of hell are closed up again. People celebrate and observe this day in various ways. Many burn more paper money and clothing so that the ghosts can use them in their society in hell. Pictures and tablets of ancestors may be put away back on the shelves or hung back on the walls. In order to encourage the ghosts to go, Taoist monks chant to make them leave.

A common tradition that many families participate in is the floating of river lanterns. Colorful lanterns are made out of wood and paper. Families write their ancestors’ names on the lanterns. A floating river lantern is believed to take or guide those ghosts. On the night of the festival, people place paper boats with the paper lanterns in the river. The living watches the boats as they float away. Like the River Styx in Greek mythology, it is hope the dead follow the lanterns back to the gates of Hell.

How long ago in history has this tradition began?  It is interesting that cultures in Asia all the way from India to Cambodia to Japan share similar beliefs. These traditions seem to date from before Buddha was alive; more ancient folk religions seem to cover the entire area. Taoism is the indigenous religion of China where a lot of the ancient folk religion is incorporated. According to Taoist records, the gates of hell are opened and hungry ghosts are released to find food or to take revenge on those who have behaved badly in the seventh lunar month. The Taoists chant together to free the ghosts. Another story talks about how the King Yama opens the gates of hell on the Hungry Ghost Festival and allows a few wild ghosts to enjoy sacrifice on the first day of the seventh lunar month. The gates are closed on the last day of that month, where the wild, hungry ghosts return to hell. Some Chinese believe that the gates of heaven are also opened during this month, and they worship their ancestors from heaven.

Trends for the Future:

Taiwan: Globalization, education, and modern technology have caused some erosion in traditional Chinese religion, though Taiwanese belief in the ghost world has seen no such decline. There are many Taiwanese youth are becoming disillusioned with modern materialism and are returning to traditional spiritual beliefs.

China: Not only are the Taiwanese holding onto traditional Chinese religion, even taking it back to the mainland. 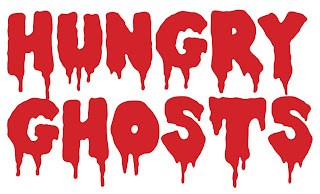 Great article, Pam. I always enjoy reading about your research.

Great post, Pam. I'd heard the term "hungry ghosts" before but I hadn't known the lore behind it.

Thank you for sharing!

Great post, Pam. I'd heard the term "hungry ghosts" before but hadn't known the lore behind it.

Thanks, Ella. I thank one Greg Lilly for asking me about this as he heard about it as he was leaving China. :-) I thought what a great idea for a post.

Thank you, Mary. I realized I heard the term too, after started researching on it--from a paranormal TV show, but learned a lot of cool information. Maybe one day, I can write a story off the info, like I did for "Bottled Spirits."