Supernatural Friday: About Those Other Angels: Guest Blogger Jean Graham 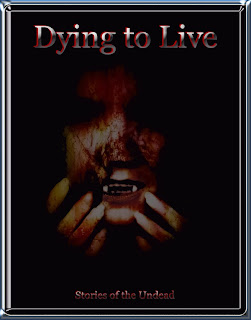 Today, I have a guest blogger for Supernatural Friday who also happens to be an old friend (we bought met each other for the first time in 1973), Jean Graham. She is blogging about vampires. She also has two vamp short stories in two anthologies.

Blame it on Bram Stoker, Barnabas Collins and a guy named Nick Knight. I love vampires. Always have, whether they’re in books, on the big screen or on TV. I love them in all their forms and nuances, from cape-twirling fiends to dentally-challenged love interests, and I’ve written short stories about them since grade school. Over the years, a number of those stories have made their way into print, though it hasn’t always been easy to get around those ubiquitous rejection slips.

You’d think, in this age of Twilight and a dozen other best-selling book series about vampires, that editors would be eager to publish vampire stories. Alas, most are not. “Tropes!” they cry, callously labeling our favorite undead characters cliché and unwelcome in their pages. Some will, however, hedge a bit and add, “Not unless you do something really new and different.”

Hmm. Well, how about something very old and different? In centuries past, vampires were believed to be demons – you know, those other angels – who possessed and reanimated the dead. In Stoker’s Dracula, the Count could transform himself into a mist, a bat or a fly on the wall. Combine those two supernatural milieus, and you have the critters that inhabit my own vampire stories.

My vamps’ most recent appearances have been in two paperback and e-anthologies published this year. “Nightcrawlers” is in Arcane II and “Turning Worms” in Dying to Live.

Here’s an excerpt from the latter:

“Matt, sweetie.” Betty’s long eyelashes fluttered innocently. “Didn’t you tell me once you knew someone who knew someone who could ‘take care of’ a problem like this, you know, permanently? Well, why don’t you tell that Janice bitch about those friends of friends, too? Just rattle her cage, okay? Shake her up a little. But get her off my back!”
Oh, this was delicious. Lovely, naked, unabashed hatred. The demon drifted still closer, savoring the moment. And in that moment, Betty Boyle began to realize that something was amiss.
The half-empty cola can tumbled from spasming fingers, bounced off her 60-inch thigh and sploshed onto the carpet.
“Hang on again, Matt.” Betty clicked HOLD again, pressed a fist to her considerable cleavage and belched loudly. “Damned indigestion.”
“I’m afraid,” the demon said, “it’s a great deal more than that.”
His sudden appearance in human guise startled Betty enough to send the keyboard on a short flight from her knees to the detritus-encrusted floor.
“Who the hell are you?” The question came out in a wheezing gasp.
“Precisely.” Proteus always found it so amusing when mortals answered their own questions.

If traditional vampires are more your cup of tea (er... cup of blood?), you may want to check out my Dark Shadows and Forever Knight fan fiction at http://jeangraham.150m.com/ where you can find info on my other pro sales. 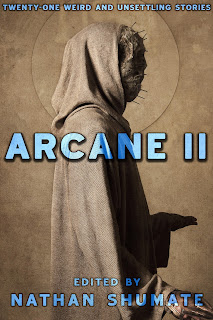 Jean Graham's Bio:
Jean Graham is a San Diego native (still lives there), founder of the science fiction organization S.T.A.R. San Diego, and is an “original Trekkie” who lives with five cats, 6000 books, 1000 DVDs, and a very indulgent husband. Feedback on any of her fiction is always welcome. Besides her website, also find her on Facebook.

Find Dying to Live anthology in Print PRINTand on KINDLE

Arcane II in print PRINT and on Kindle