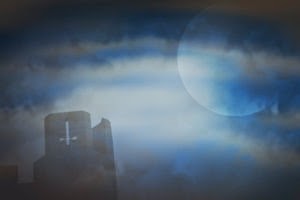 “Ghosts are a metaphor for memory and remembrance and metaphorically connect our world to the world we cannot know about.”

Many of us think about spirits 365 days a year, but there are those who began to think of them as soon as pumpkins start to appear in grocery stores and the cooler autumn breeze kicks the leaves changing color off the trees. Those same people want to hear scary ghost stories, and if those tales have a basis in fact, well, that’s all the better.

Humankind has been fascinated with the dead since the time of the cavemen, their shaman telling them tales around a blazing campfire built to keep the dark  and worse away. Some cultures honor their dead and welcome their ancestors to come visit them, bringing them foods and gifts. Just like Mexico does with their Day of the Dead (Día de los Muertos). More than 500 years ago, when the Spanish Conquistadors landed in what is now Mexico, they encountered natives practicing a ritual that seemed to mock death. It was a ritual that the indigenous people had been practicing for at least 3,000 years. A ritual the Spaniards tried with no success to eradicate. 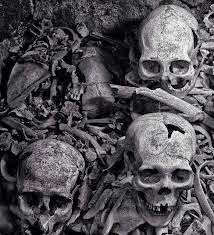 The Aztecs and other Meso-American civilizations kept skulls as trophies and displayed them during the ritual. The skulls were used to symbolize death and rebirth. The skulls were used to honor the dead, whom the Aztecs and other Meso-American civilizations believed came back to visit during the month long ritual. The Spaniards thought death of as the end, while the natives embraced it, as to them it was only the beginning. Not separating death from pain and wealth from poverty, unlike in Western cultures.
Not able to kill this barbaric ritual, the Spanish merged it with “All Saint’s Day” and “All Soul’s Day,” the first two days of November. When the natives celebrated it for a month, always falling on the ninth month of the Aztec Solar Calendar, approximately the beginning of August. Festivities were presided over by the goddess Mictecacihuatl, known as "Lady of the Dead.” 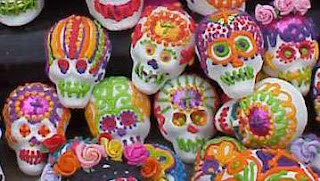 Nowadays, people don wooden skull masks called calacas and dance in honor of their deceased relatives. They placed wooden skulls on altars dedicated to the dead. Sugar skulls, made with the names of the dead person on the forehead, are eaten by a relative or friend. Families would also visit the cemetery where their loved ones are buried. They decorate gravesites with marigold flowers and candles. They bring toys for dead children and bottles of tequila to adults. They sit on picnic blankets next to gravesites and eat the favorite food of their loved ones. Strangely enough, in Richmond, Virginia, families would come to town and visit their buried dead at Hollywood Cemetery, picnicking by the graves. Today, in the contract, it is stated that when you purchased a gravesite there, no picnics are allowed there!
Honestly, the dead may haunt the graveyards, but they don’t stop there, but paranormal activity has been cited in homes, schools, hospitals, prisons, amusement parks, so many places. And they don’t wait for Halloween or Day of the Dead or All Soul’s Day, but any day of the year works for those who passed away.
After all, the dead don’t stay dead anywhere you look!
Posted by Pamela K. Kinney at 5:58 PM

Yes, it really is just the beginning.