Supernatural Friday: You Better Watch Out! You Better Beware! Krampus Is Coming for You! 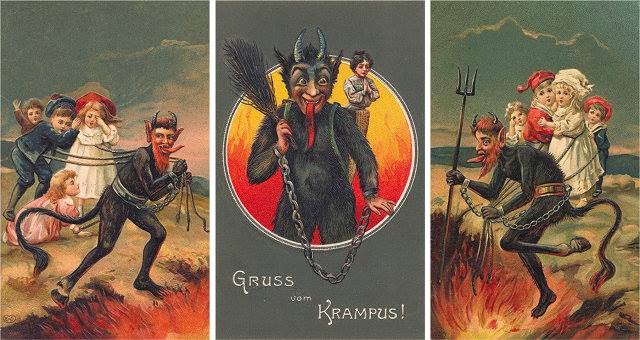 Christmas is not just a time of joy, gifts, and goodwill, it’s also a season of dark myths and legends. In the olden days in Finland, they believed in Joulupukki. That word means Yule buck. 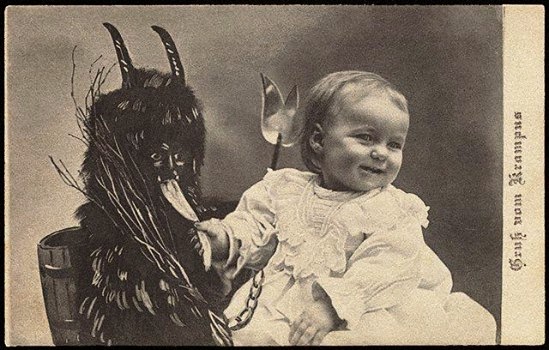 In December, pagan people had big festivals to ward off the Joulupukki. These spirits of darkness wore goat skins and horns. In the beginning this creature didn't give presents but demanded them. It was an ugly creature and frightened children. It is unclear how this personality was transformed into the benevolent Father Christmas. Nowadays the only remaining feature is the name. The process was probably a continuous amalgamation of many old folk customs and beliefs from varied sources. One can speak of a Christmas pageant tradition consisting of many personages with roles partly Christian, partly pagan: A white-bearded saint, the Devil, demons, and house gnomes. Nowadays the Joulupukki of Finland resembles the American Santa Claus. While most gift givers around the world deliver their presents in the middle of the night while everyone is sleeping, children in Finland get to see Joulupukki in the act of delivering the presents. This reminds me of Black Peter and the Krampus, both being Santa’s “evil twin.” In many areas of the world, it is said that St. Nicholas has a companion. This companion is Krampus, though another version is Black Peter, or Zarte Piet or Zwarte Piet. Black Peter is associated with the Netherlands and has dark skin. Though Krampus isn't a man. He has horns, goat hair, hooves, and claws, not unlike a demon. His job is to accompany St. Nicholas and to warn and punish bad children. He is said to carry a basket on his back where he will place the bad children and take them to Hell to be tossed into the pit. It puts a frightening twist on “have you been naughty or nice!” And Krampus may be in some parts of Germany, in other Germanic regions there are Belsnickle and Knecht Ruprecht. While  France has Hans Trapp and Père Fouettard. 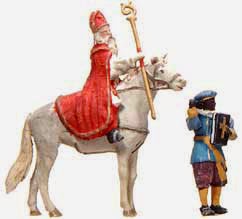 Krampus originates from Krampen--meaning claw. He is is said to be the son of Hel in Norse mythology. Krampus is the dark companion of St. Nicholas, the traditional European winter gift-bringer. According to folklore, Krampus purportedly shows up in towns the night before December 6, known as Krampusnacht, or Krampus Night. December 6 also happens to be Nikolaustag, or St. Nicholas Day, when German children look outside their door to see if the shoe or boot they'd left out the night before contains either presents (a reward for good behavior) or a rod (bad behavior).
This fiendish being is usually seen as a classic devil with horns, cloven hooves and monstrous tongue. Unlike American children who get coal if they’re bad, instead the Krampus beats them savagely for their misdeeds and then drag them down to hell. Born of a pre-Christian, Alpine Pagan tradition, he is identified by matted-black hair, along tongue that snakes out of his maw, and cloven hooves. He also sports a large wicker basket on his back, filled to the brim with thorny, unbreakable birch sticks for those beatings he delivers. He always comes with St. Nick who brings presents, but before the gifts are handed out, those who are bad is given what they "deserve" by him.
A more modern take on the tradition in Austria, Germany, Hungary, Slovenia, and the Czech Republic involves drunken men dressed as devils, who take over the streets for a Krampuslauf. This is a Krampus run, where people are chased through the streets by the "devils."With marathons where people run from zombies, this might the next new holiday marathon.  Why not runners bolting from Krampus devils with switches?

There would be young men that dress up in goat skins and masks they spent two weeks making and on December 5th, head out to scare all, and carry out "birching," mainly on young girls. Krampus makes the Grinch before his heart went several sizes bigger look like a goody two-shoes.

The Catholic Church forbade the raucous celebrations. Then fascists in World War II Europe found Krampus despicable because it was considered a creation of the Social Democrats.

Krampus is making a comeback now, due to the "bah, humbug" attitude in pop culture. Krampus walks—like the RVA Krampusnacht  to be held tomorrow night in Richmond that I will have to miss as being out of town— and Krampus parties are coming back with a vengeance.  Some can be found here: Krampus.com

Austria is commercializing the harsh persona of Krampus, selling chocolates, figurines, and collectible horns.  There are Krampus ugly sweaters, sweatshirts, postcards and more that on can purchase of their favorite Yuletide demonLooks like Krampus is fast on his way to becoming commercialized. 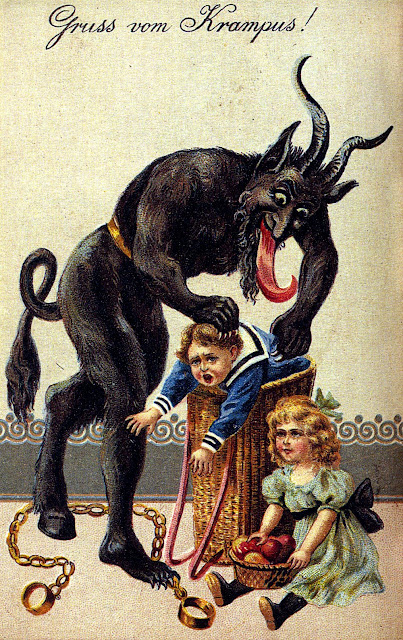 The History Channel show True Monsters had a segment about a Christmas devil, but I can't recall if it was called Krumpus or not.

Most likely was, Faith.