A Paranormal Experience at the Bunnyman Bridge in Clifton, Virginia 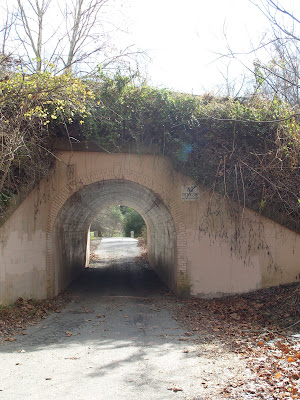 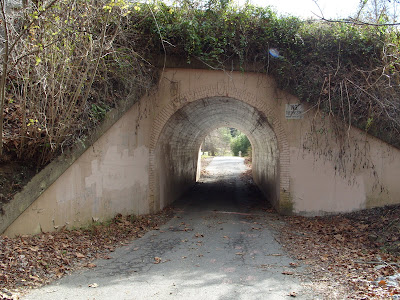 Today, my husband drove me to retake a few photos of places and statues in Richmond and then, up to Clifton, Virginia where the Bunnyman Bridge is. The statues and the White House of the Confederacy were taken in black and white before and I wanted them in color for Schiffer. The Bunnyman Bridge, because we had went to wrong Colchester Road back in October. This time we found the infamous Bunnyman Bridge on the right Colchester Road, which is off Fairfax Station Road
We drove right up to it. The railroad tracks rode over it, covered with weeds, and you can drive through it to the other side of the road. Bill parked right there in the road and lucky for us, no other vehicle was behind us. I got out and walked up to it to take some photos. What I didn't expect was the weird feeling that overwhelmed me, like someone was watching me, a crazy, itchy feeling that gave me chills. Even wilder, after I took several pictures I caught a weird blue light that began to form in one picture, moved in another, and in the third one became a bright blue orb just above the entrance. The rest of the photos I took before it had nothing in it, or the couple after. This was in the bright daylight at Noon. Not night time when most orbs are photographed, but in the daytime. The last picture will be in the book and I hope they will use it for the cover. So I won't be using it on today's blog so you can see it too, just the first two.
I ran back to the car, gave Bill my camera, and grabbed my electronic voice recorder , pacing back to do a minute of recording. I haven't uploaded that yet to see if anything was recorded. Funny thing, before I recorded on the evp, I asked if anyone was there, a sudden wind swept into the tunnel, scattering leaves like mad. I had the feeling I was not alone.
I headed back to the car as Bill couldn't be parked in the middle of the street forever. Sooner or later someone would come down that small road and besides, we had to get back to Richmond to get front brakes for the car as they kept grinding whenever the car stopped. Someday I will return to the bridge though, maybe with others to investigate further. It's not the Bunnyman--that's only a myth, but from other paranormal investigators who checked it out before, they had gotten voices on recorders and more, and my photos, there is more going on with the Bunnyman Bridge than an urban legend of an insane murderer in rabbit costumes.
Posted by Pamela K. Kinney at 1:40 PM

Very cool, Pamela, to get this in daylight.
Teri

Oh my God, Pamela, that is so freaky!

I am a complete believer of spiritual beings. I lived in a haunted house once and I've felt the presence of someone who wasn't there. It really is an odd sensation.

Sheesh, seems like you are a magnet for all kinds of strange stuff. I thought the first pic looked like some kind of reflection on the camera lens, but that second one definitely isn't!

Bummer you had to get a brake job. That's expensive! Hope this new book makes you some money to make up for it.