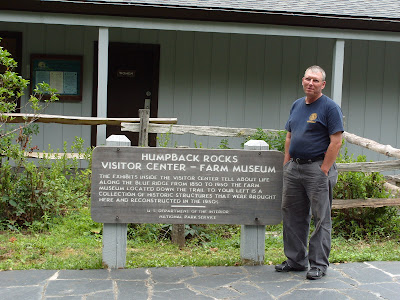 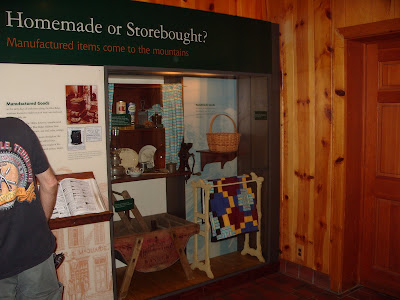 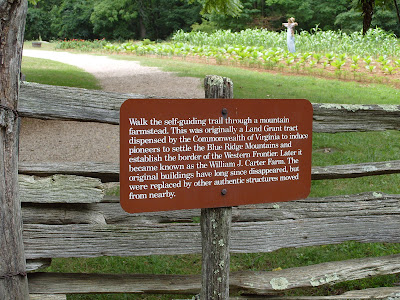 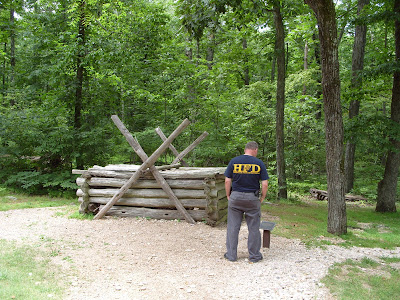 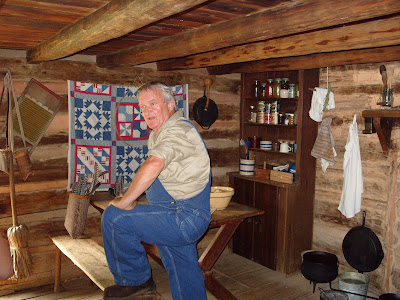 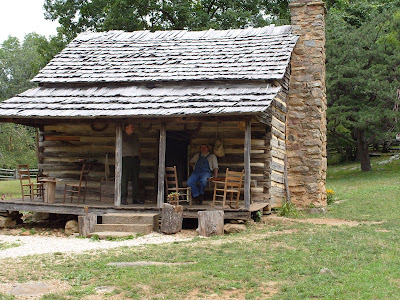 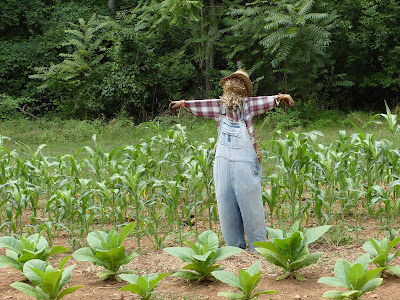 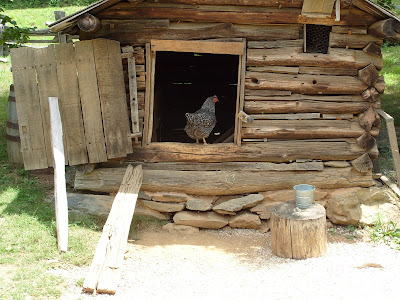 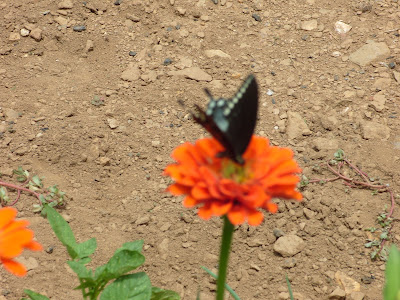 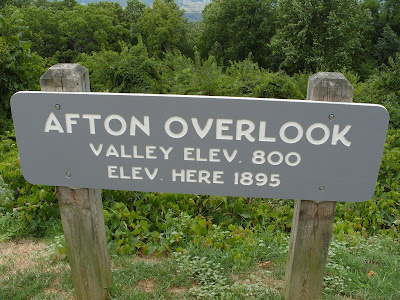 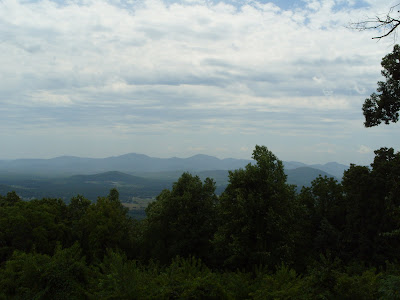 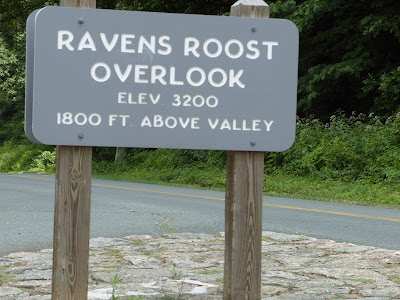 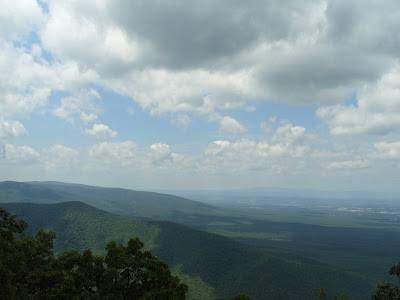 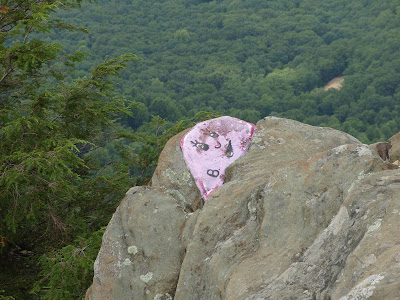 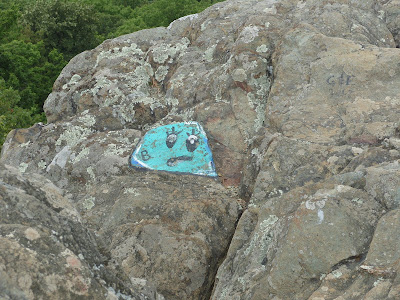 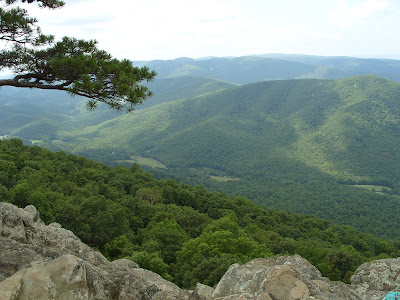 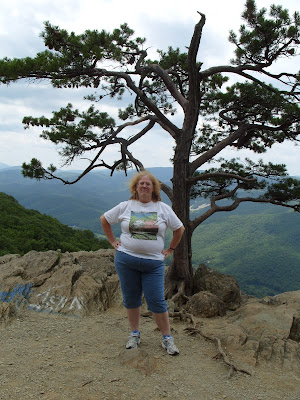 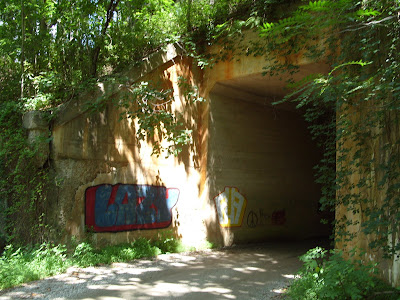 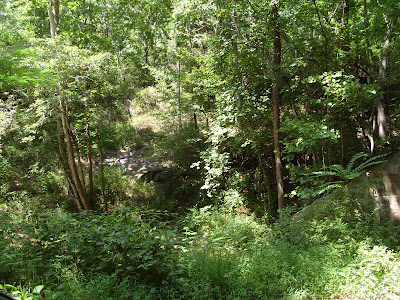 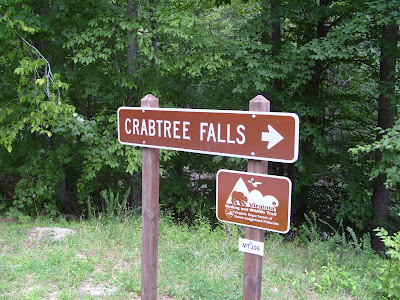 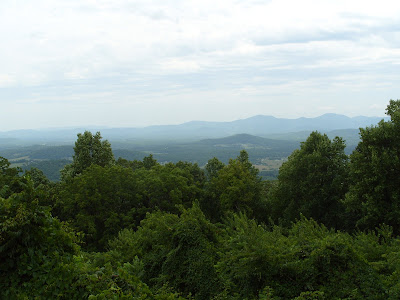 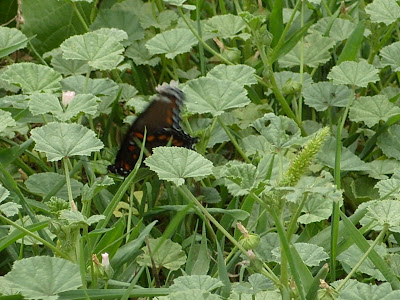 We drove along the Blue Ridge Parkway in Virginia on Tuesday, July 20th. Not only was it ten degrees cooler up in the mountains, but gorgeous. Not we traveled through mountains that towered almost as tall (not quite though) as out west where I grew up, but we saw breathtaking scenic views from edge of mountains down on valleys with woods, towns, and farm land. My husband and I so want to come back in October when autumn colors are out.
I had never seen so many butterflies (particularly, large, blue winged ones) as we did that day. They lingered on flowers, they settled on the road and sometimes covered the air. We caught sight of a buck chewing a leaf, who watched us drive by unconcerned, and then went back to his eating. As you can see above, I took pictures of two faces drawn and colored on rocks (one blue, the other pink) that sprouted up at the edge of a cliff. Who dared to not only defaced the natural beauty, but had to teeter dangerously in an area that with one slip and they would tumble to their possible deaths?
We stopped at the Humpback Rocks Visitor Center, where they had a farm museum inside and down a path that lede to a farm with a garden that had a scarecrow, a chicken coop with chickens, and other buildings used in the area from from 1890s-1950s.
We also got lost at one point and the GPS had us driving along a dirt, rocky road for a while, until we came to a bridge tunnel that reminded me creepily of the Bunnyman Bridge and Crawford Road Bridge. Was this one haunted also? Nothing showed up on my photos and I never tried to do a recording to find out if I caught any evps.
We did get to Crabtree Falls, but discovered needed three dollars cash to park, so nver got to see the next largest falls east of the Mississippi. And being late, too late to check out the Walton House Museum nearby. Luckily, we never did park and walked to the falls, for it rained, becoming a torrental downpour with wild wind. We plan to return to Nelson County to see these two.
We drove home all the way in mostly heavy downpour until got on Route 288 to Chesterfield. The rain never got there.
Posted by Pamela K. Kinney at 5:59 AM

Very Cool. Thanks for sharing your adventure with us. :)

And thanks, Karen, for enjoying it. :)

Enjoyed seeing the pictures. Thanks for posting them.

You were getting closer to us in Lynchburg. I've often wanted to take a day trip to that area. I do love the mountains. What road routes were you on? You pictures are fabulous! Thanks for sharing.

Vonnie, we got off I-64 the exit to Waynesboro (visited Stone Soup Books that monring in Waynesboro), then went opposite way to get onto Blue Ridge Parkway--heading south. We got off into Nelson County by afternoon.

Thanks for sharing, beautiful! I grew up not far from the Blue Ridge Parkway, miss those lovely blue-green hills and spectacular valley views. It's been years since I drove it!

Finally got a chance to come on and view these pics. What beautiful photos!!

Thanks for posting about all this! Glad you had a good time.

When you are having health problems, it is important to take a trip like this for stress relief!!