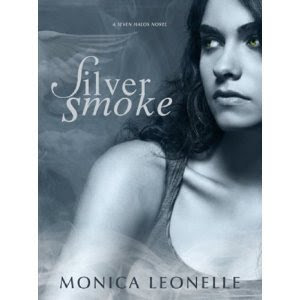 Fifteen-year old Brie van Rossum wants to know what caused her mother’s death, but she’s trapped in Honolulu under the watchful eye of her rock star father, James, her overprotective older brother, Pilot, and the relentless paparazzi who would love to capture her breaking down on film. Plus there’s that complication with her brother’s best friend, Rykken.
And if things couldn’t get any stranger for her, the clue about her mother’s death finally comes in the form of four teenage girls--or at least, that’s what Brie thought when she first met them. Except they’re not normal teenagers, but Hallows--descendants of archangels and humans. Brie learns that she is a Hallow too, just like her late mother. Brie will learn she has enemies and begins to wonder if she really can trust her new found friends either. Plus there’s that complication with Rykken, as it develops into an attraction.

Silver Smoke is a Young Adult urban fantasy. It is a good story, actually starting to get better when Rykken discovers he too is a Hallow and has powers. I am looking forward to the next book in the series.
BUY
Posted by Pamela K. Kinney at 12:08 PM

Posting lol. This book sounds interesting and I will have to check it out. :) I hope the interview was good.