Supernatural Friday: Legends of the Moon 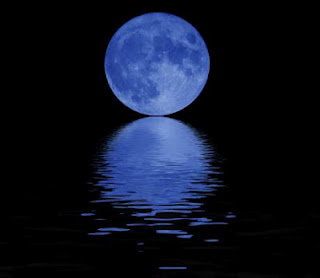 "Blue Moon
You saw me standing alone
Without a dream in my heart
Without a love of my own"
With a blue moon almost upon us at the end of this month, I am blogging about myths and folklore to do with the moon.


For thousands of years, people have looked up at the moon and wondered about its divine significance. No surprise many cultures had lunar deities - that is, gods or goddesses associated with the power and energy of the moon. If you're doing a moon-related ritual, in some traditions of Wicca and Paganism you may choose to call upon one of these deities for assistance.


Alignak is the god of both the moon and weather. He controls the tides, besides also earthquakes and eclipses. In some stories, it is told that he is also responsible for returning the souls of the dead to earth so that they may be reborn. Alignak may appear in harbors to protect fishermen from Sedna, the wrathful sea goddess.


Artemis is the Greek goddess of the hunt. As her twin brother, Apollo, was associated with the Sun, Artemis became connected to the moon in the post-Classical world. During the ancient Greek period, although Artemis was represented as a lunar goddess, she never gotten portrayed as the moon itself. In post-Classical artwork, she is depicted beside a crescent moon and is often associated with the Roman Diana as well. Like Artemis, Diana began as a goddess of the hunt who later evolved into a lunar goddess.
Cerridwen is the keeper of the cauldron of knowledge in Celtic mythology. Besides the giver of wisdom and inspiration, she is often associated with the moon and the intuitive process. As a goddess of the Underworld, Cerridwen is often symbolized by a white sow, which represents both her fecundity and fertility and her strength as a mother. She is both Mother and Crone; many modern Pagans honor Cerridwen for her close association to the full moon.


Chang'e of Chinese mythology was married to the king Hou Yi. Although he was once known as a great archer, later Hou Yi became a tyrannical king, spreading death and destruction wherever he went. People starved and were brutally treated. Hou Yi greatly feared death, so a healer gave him a special elixir that would allow him to live forever. Chang'e knew that for Hou Yi to live forever would be a terrible thing, so while he slept, one night she stole the potion. When Hou Yi saw her and demanded the return of the potion, she immediately drank it and flew up into the sky as the moon, where she remains to this day. In some Chinese stories, this is the perfect example of someone making a sacrifice to save others.


In Aztec stories, Coyolxauhqui was the sister of the god Huitzilopochtli. She died when her brother leapt from their mother's womb and killed all of his siblings. Huitzilopochtli cut off Coyolxauhqui's head and threw it up into the sky, where it remains today as the moon. She is typically depicted as a young and beautiful woman, adorned with bells and decorated with lunar symbols.


Hecate was venerated as a mother goddess, During the Ptolemaic period in  was elevated to her position as goddess of ghosts and the spirit world. Many contemporary Pagans and Wiccans honor Hecate in her guise as a Dark Goddess, although it would be incorrect to refer to her as an aspect of the Crone, because of her connection to childbirth and maidenhood. It's more likely that her role as "dark goddess" due to her connection to the spirit world, ghosts, the dark moon, and magic.


Thoth was an Egyptian god of magic and wisdom, and appears in a few legends as the god who weighs the souls of the dead, although many other stories assign that job to Anubis. Because Thoth is a lunar deity, he is often portrayed wearing a crescent on his head. He is closely associated with Seshat, a goddess of writing and wisdom, who is known as the scribe of the divine.


Sina is one of the best-known Polynesian deities. She resides within the moon itself, and is the protector of those who might travel at night. Originally, she lived on earth, but got tired of the way her husband and family treated her. So, she packed up her belongings and left to go live in the moon, according to Hawaiian legend. In , the story goes that Sina, or Hina, simply got curious about what it was like on the moon, and so paddled her magical canoe until she got there. Once she had arrived, she was struck by the moon's tranquil beauty and decided to stay.


Last, is Selene. She is the sister of Helios, the Greek sun god. Tribute got paid to her on the days of the full moon. Like many Greek goddesses, she had a number of different aspects. At one point she was worshipped as Phoebe, the huntress, and later was identified with Artemis. Her lover was a young shepherd prince named Endymion, who was granted immortality by Zeus - however, he was also granted eternal slumber, so all that immortality and eternal youth was wasted on Endymion. The shepherd was doomed to sleeping in a cave forever, so Selene descended from the sky every night to sleep beside him. Unlike most other lunar goddesses of , Selene is the only one who is actually portrayed as the moon incarnate by the early classical poets.


But the moon has more to do with superstitions and legends besides as a diety:


The word lunatic comes from the Latin luna. This is because it was believed that people were more likely to exhibit aberrant behavior during a full moon. Although studies have been done showing that emergency room visits and accidents are increased during the full moon period, there has yet to be conclusive evidence for causation. Of course, with the full moon at some point being a part of a werewolf ‘s transformation, maybe this is what they thought.


The moon seems to have an effect on animals as well as people. A expert on animal behavior reports that hamsters spin in their wheels far more aggressively during the moon's full phase. Deer and other herbivores in the wild tend to ovulate at the full moon, and in 's , the full moon is mating time for coral. Werecoral?


The Strange Case of Dr. Jeckyll and Mr. Hyde, by Robert Louis Stevenson, was inspired by the strange -- and yet very true -- case of Charles Hyde, a man who committed a series of crimes at the time of the full moon.


A British legend tells that if Christmas falls on the day of a dark Moon, the following year's harvest would be a bountiful one. In some parts of the , it is believed that a waxing moon on Christmas will insure a good crop the next fall, but a waning moon indicates a bad one will happen.


When a halo is seen around the moon, in some countries this means bad weather is coming.


The first time you see a crescent moon for the month, take all your spare coins out of your pocket, and put them in the other pocket. This will ensure good luck for the next month.


It is believed that the fifth day after a full moon is the perfect time to try to conceive a child.


Offerings are made to the ancestors on the night of a full moon in some Chinese tales.


The moon is held captive by a hostile tribe in some Native American legends. In the tales, there are a pair of antelope who hope to rescue the moon and take it the village of a good tribe. But Coyote, the trickster, interferes. The antelope chase Coyote, but he throws the moon into a river each night, always out of reach of the antelope.


The night of the full moon is believed to be a good time for divination and scrying, so if you want to find some things out, a good time to do so.
Posted by Pamela K. Kinney at 12:03 PM

I enjoyed reading the legends and myths about the moon. Some I knew and some I didn't. Interesting!

I may have to try changing coins to another pocket... lol

Thank you so much for sharing with us. This was an awesome post :)

Glad you enjoyed them, Karen.

You're welcome, Denise. Glad you enjoyed them.

This was very interesting, Pamela.