Defining what is a haunting should be simple. Right. Like this traditional description from a dictionary: a haunted place is somewhere inhabited by apparitions or ghosts. These definitions reflect cultural traditions. We are all immersed in our culture and naturally pick up these ideas whether we are aware of it or not. And yet, experts in the paranormal field have so many explanations.
.

An important question; A lot of recent ghost research is based around comparing 'haunted' and 'non-haunted' locations When one looks for differences between the places, there is hope that vital clues will be found to the true nature of hauntings. For such research to be of value, it is vital that a way be found to define a haunting.

For most people, a sighting of a spirit is the normal reason for a haunting. And yet, there are more. Sounds, like footsteps, knocks and disembodied voices. Odors, whether terrible or sweet. Something familiar with a person in life, like cigar smoking, maybe smelled in his home after death. Odd sights not a full body apparition. Feelings: headaches, static build-up, touches, and cold spots.  Object movement: doors, taps and light switches, dishes thrown, objects lost and sometimes recovered, objects falling (eg. pictures, ornaments). Plus there are the reactions from pets of something not visible to our eyes.

Now when one investigates a haunting report and explains all its components using natural causes, would it cease to be a haunting? Most people would most likely agree. Note, however, that a haunting is usually composed of several components or different phenomena. Each component may turn out to have a different, unrelated mundane cause. You could, therefore, conclude that such a haunting, as a whole, was only a single concept in the mind of its witnesses.
What if you can explain most of the phenomena in a haunting but not all of them? Is it still a haunting? It could be that the only thing preventing you for explaining the entire haunting is a lack of crucial evidence. Nevertheless, it still contains some vital 'unexplained' components. So, another definition would be a collection of odd, apparently paranormal, events reported at a particular location, at least some of which have not, on proper investigation, been explained by natural causes. Not as cool as a place inhabited by a ghost, but still, an explanation.

But no matter what “Ghost Hunters” or the others say, no one really knows what a ghost is. Sometimes it is an intelligent haunt, where you received answers and learn it was someone who passed away, like I got over my ghost box, the first and last name of a man, Philip Barnes, who died in the 1622 Massacre at Falling Creek Ironworks.  Other times, it is like a recording, where something repeats itself at a certain time or certain day. Not a ‘real’ phantom.  Then there are ‘demons’, possible theories of time travel, etc… So many reasons, so many “who knows the truth?”

No matter the possibility. We still enjoy reading about haunting. Taking ghost tours, or watching paranormal TV shows and movies. And at this time of the year, when Halloween is when the veil between the living and the dead is at its thinnest, it’s all about enjoying that chill up our spine. 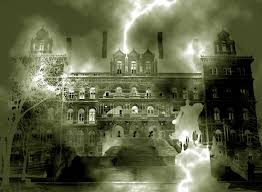