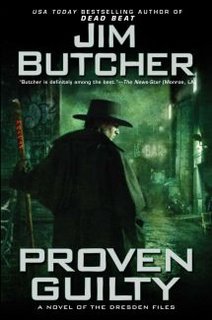 I admit it; Jim Butcher's Dresdan Files is addicting. And this latest novel, Proven Guilty is no exception. Harry Dresdan, a wizard who's also a P.I. has new challenges, finding out that nothing in his world is totally white or black, as there's too many shades of gray in between.

In this book he is approached by Molly, the daughter of Michael, a friend who is also a Knight of the Cross and works for God, and whom Harry has avoided for the past two years. He discovers that she wants him to bail her boyfriend out of jail. The boyfriend, Nelson is accused of beating up a movie theater owner at SplatterCon, a horror convention. But Harry suspects Nelson is innocent and as he investigates into it, discovers possibly demons or spirits are using movie monsters to do their dirty work. Mix that up with Molly's mother who has never liked him, a convention full of horror fans and other strange things that get stranger, obviously nothing will be easy for Harry to dig up the truth.

Take all the cool detective novels you ever read, then spiced them up with magic, monsters and mayhem, add a little wizardry on a par with Harry Potter, just more grown up, and you have one incredible adventure that you won't want to put down.

I give this novel 5 DRAGONS.