Excerpt from Haunted Richmond, Virginia-From Train Under the Hill Chapter 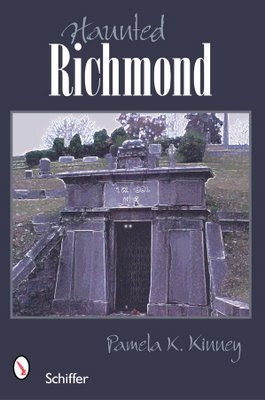 Enjoy this excerpt from my nonfiction ghost book, Haunted Richmond, Virginia. If you like reading real ghost stories then you'll enjoy this book. It has photos of some of the haunted places, the ghost stories and even some legends and myths in it too. Enjoy reading how Richmond's 'Vampire' came to be and the ghostly stories about the train buried under the hill in Church Hill, a section of Richmond.

Blurb from back of the book:
Richmond, Virginia is chock-full of ghosts and haunted places. This city names Edgar Allan Poe as its native son, and it is rich in ghostly lore, legends, and tales. Join this tour to:• Learn why Virginia's governor shares his mansion with ghosts;• Dine with ghosts at Ruth's Chris Steak House and Crab Louie's Seafood Tavern;• Discover that the Byrd Theatre has more than movies to offer customers;• Visit the prison in Powhatan (it might not be safe, even for those working there);• Call on the Lady in Red who roams the corridors at Wrexham Hall.These and other interesting and scary stories will transport you beyond, to a Richmond that most mortals never see!


An excerpt from the chapter of the Train Under the Hill--the first time the Richmond Vampire was mentiuoned plus the hauntings too:

Questions and legends abound about this even today. Are the two black laborers still buried in that tunnel? And were they wrong, and more than four people were killed in the disaster? Many survivors reported that several other laborers had just been taken in for that day's work. How many people were unaccounted for in reality? The place was filled with sand; the two entrances are sealed off and hidden behind a growth of trees and vines.
A legend that connected it to the `Vampire' of Hollywood Cemetery came about when the one man who had survived was taken later to a hospital. Having gotten mixed up in the vampire legend as being some kind of fiend that dug his way out if the tunnel, it was said that he ran all the way back to the mausoleum where he, the vampire, was buried, while being pursued by an angry mob.
For a long time, there were no ghost stories attached to the tragedy. But as Sandi of Haunts of Richmond said, "Yes, there is." A man on one of her tours told her
that he had worked at Richmond Cold Storage, the white building in front of the hill. He
worked the graveyard shift and would hear the sounds of pickaxes coming from the hill.
One young man, who went to Virginia Commonwealth University, along with some friends, approached the hill one night when they heard the sound of air brakes coming from inside it! They knew it wasn't from some modern train as they looked back at the tracks several blocks behind them and saw nothing. My husband said that it had to be the sound of steam, as it was a steam engine buried under that hill, and wouldn't have the air brakes of a modern train.
The third story attached to this tragedy has to do with the park at the top of Church Hill. People claim they can hear cries of help coming from inside the hill itself.

I need someone to contact me regarding a cat haunting. junkifunki@aol.com

I have lived in Church Hill for nearly 20 years and I have never heard of any of these tales. In fact, most newbies don't even know about the train tunnel until someone tells them.

Not that it's not interesting. But, I wish some names or other references were used to give the story a little credibility.

i think you did a good job on the book. i dont detect your purpose to have been to illustrate absolute factual accounts, historically. you were merely recounting the yarns and tales famous to the area. I dont think theres much credibility available on these things, other than some facts now known abuot the tunnel incident (i know from personal involvement). debunked is the "demon" emerging from the tunnel nonsense, in fact this was the engine man, burned nearly to a crisp having crawled under the train to get out...with 3rd degree burns all over body so he must have looked like a demon (he died once they got in him a nearby taxi as no ambulance was avail at the time). also the rumor of more than two black men trapped in there, it was two for sure. there was a rumor at the time (1926?) that others were missing but in fact they were found elsewhere. somehow these rumors and urban legends have persisted, despite the fact that most of it is shown to be wholesale BS. no ones going to see that train anytime soon. recent cameras emplaced in the tunnel from above revealed that its totally unstable and full of water, which means its the exact same geological probs they had back then which will deter any new excavation attempts.