Review of Ghosts of Hollywood by Marla Brooks 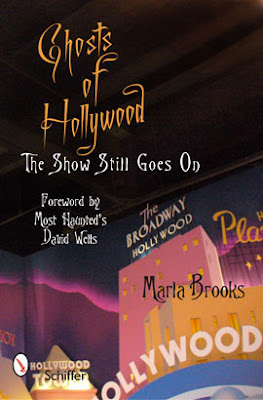 Purchase this book at Schiffer Books/Ghosts of Hollywood

I grew up in California, and been to Los Angeles and Hollywood many times. Living in Virginia since 1985, I thought that this book would be interesting to read and it was.
With a past that reaches way back before the Spanish came to California, L.A and Hollywood has its share of ghosts and legends as much as Richmond, Virginia does. I had always stated that both California and Virginia are both very haunted states, due mainly to being settled not only by Native Americans, but by English settlers here and the Spanish on the West Coast. Blend Hollywood with a haunted Hollywood with movie stars and films being made, and you get an eclectic pot of ectoplasmic hauntings and weird stuff going on.
Living out there until 1985 I have heard some of the stories I read in the book, others I found out later, but there was still plenty of wonderful ghostly tales for me to read and discover.
Some favorites were Bela Lugosi’s daily walk past the intersection of Hollywood and Vine, how some of the ghosts from Hollywood Forever cemetery still visit the Paramount Studios next door, the Hollywood Wax Museum chapter, and the Hollywood Ghostly Urban Legends chapter. But I also enjoyed reading about all of the ghosts in here, including many that Marla and her friends encountered themselves. It’s a good book for October reading. It is also a great summer beach read, as you lie in the sand and sun yourself. Summer, Winter, Autumn or Spring, true ghostly tales are always good year round. This book is no exception.
So the next time you have the chance to go to California and tour Hollywood, buy this book and take a tour of a different kind. Yes, you can always take the normal tour of Hollywood stars’ homes or Universal Studios, or even eat at some of the places you seen in movies and TV shows. But why not do something way out of the norm and visit many of the haunted places that flavor this city, using this book as a guide. You just might see movie stars all right, just of the supernatural kind.
As it has been said, “All the world is a stage and the people merely actors”, and in Hollywood it seems that ghosts of celebrities never stop performing, especially for the living.

I give this book 4 dragons.