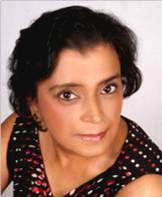 Summary of The Forbidden Daughter –
When a young widow refuses to comply with her in-laws' dictate to abort her unborn child, will her rebellion turn out to be the greatest mistake of her life, or a blessing in disguise? This is the story of one mother’s valiant fight to protect her daughters in a society that often frowns on female children, and the only man who will help her in her battle when the stakes become impossibly high.

THE FORBIDDEN DAUGHTER is woven around the hot-button social issue of vanishing girl children in contemporary India, where gender-based abortions and female infanticide continue to be practiced in some areas despite laws to ban the practices.

About Shobhan Bantwal –
Shobhan Bantwal is the author of THE DOWRY BRIDE and THE FORBIDDEN DAUGHTER. Both novels are set in India and released by Kensington Publishing Corp. Shobhan’s short story titled WHERE THE LOTUS GROWS is scheduled for publication in an anthology in spring 2009 and the proceeds will be donated by the publisher, Freya’s Bower, to a battered women’s shelter.
As a freelance writer, Shobhan frequently writes columns for India Abroad. Since 2002, Shobhan’s articles and short stories have also appeared in a variety of other publications including The Writer magazine, Little India, U.S. 1, Desi Journal, India Currents, Overseas Indian, New Woman India, Kanara Saraswat and Sulekha. Her short stories have won honors and awards in fiction contests sponsored by Writer’s Digest, New York Stories and New Woman magazines.

Prologue for The Forbidden Daughter
Oh, Lord, I beg of you.I fall at your feet time and again.In my next incarnation, don't give me a daughter; Give me hell instead . . .
Folk Song from the State of Uttar Pradesh, India
~~~~~~~~~~~~~~~~~~
“Your child will come at the harvest full moon,” the old man said.
Jolted out of her dark, melancholic thoughts, Isha Tilak looked up, and stared in astonishment at the man who had uttered the startling words. He was obviously addressing her, because there was no one else in the immediate vicinity.
His strange remark captured her attention, thrusting aside her private musings.
“It is called Kojagari Purnima. It is the night when Lakshmi, the goddess of wealth and abundance, descends from her heavenly abode to bless her devotees,” he added, stroking his luxuriant salt-and-pepper beard that more than compensated for the total absence of hair on his large, misshapen head.
He was supposedly a sadhu—a sage or holy man. He was certainly dressed for the part in his faded saffron robe—typical garb for Hindu holy men. Perhaps because she continued to wear a baffled look, he smiled. The simple motion transformed and softened his austere face, creating deeper furrows in his gaunt cheeks. “Yours will be a female child who will bring light and abundance to the people around her.”
She shook herself out of her stunned silence. It took her a moment to comprehend his words. Then natural curiosity took over, prompting her to goad him, test him. “How do you know my child will be a girl?”
He ignored her question. Instead he said, “Your daughter comes as a gift from Lakshmi, so she will enjoy prosperity and many comforts in her life, and, being generous, she will share them with others.”
“But my in-laws think she’s a curse,” Isha informed him, the bitterness in her voice hard to conceal and the despondency in her tear-swollen eyes a testimony to her despair. “In fact, they have forbidden me to have this child.”
“I know,” he said, with a thoughtful nod. “I am also aware that there is something which some evil doctors use to eliminate female children before they are born. It is one of the many scourges of kaliyug. Modern society.”

The Challenge of Writing Ethnic Fiction
By Shobhan Bantwal

Writing fiction is hard enough, but writing ethnic fiction for an audience that knows little to nothing about certain cultures is even more difficult. I realized that very quickly when I started to write stories woven around my Indian culture. Having great story ideas is one thing, and translating them into interesting stories is another.

Having been born and raised in India, I take certain things associated with Indian culture for granted, such as the customs, religious beliefs, food, the accepted ways of social interaction, and even the philosophy. But incorporating all of those elements into a full-length novel and making it into a story that is intriguing enough to keep readers turning the pages has been a challenge—albeit an enjoyable challenge.

Not many American readers and moviegoers know a lot about Indian culture. It is not because they are ignorant; it is because Indian writers and moviemakers have not been effective in portraying the true face of India to American audiences. The real India lies somewhere between the glitz and glamour of Bollywood movies and the poverty and despair of somber literary novels and documentaries.

Creating exotic backdrops and dramatic storylines goes only so far in stirring readers’ interest. Along with that the characters need to be credible, with a balance of good and evil, handsome and ugly. They need to capture not just the minds but also the hearts of readers. To top it all, they need to do all of the above within the first few pages, or else a writer has lost a valuable reader.

Needless to say, I have to put a lot of thought into writing my two books, THE FORBIDDEN DAUGHTER and THE DOWRY BRIDE, so the final products are something a wide variety of audiences will not only read but enjoy.

The Forbidden Daughter can be ordered at: http://www.amazon.com/Forbidden-Daughter-Shobhan-Bantwal/dp/0758220308

You can visit Shobhan Bantwal at her website – www.shobhanbantwal.com

I loved this book. Excellent--a great love story and a chilling mystery.

Sorry to be late, thank you for hosting Shobhan's tour today. It is such a great book and she handled those hot button topics very well.

Unhappily, women are still not valued as they should be. Good luck with your book.

Thank you for hosting me on your blog. Appreciate the enthusiastic support. Love your site!

No problem. I hope it helped sell your book. :-D Always a pleasure to host great authors.