What Hovered in the Sky at King's Dominion? 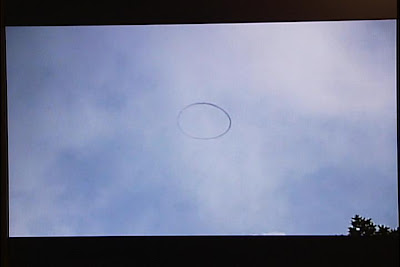 This was on my local news, WTVR-Channel 6 http://www.wtvr.com/Global/story.asp?S=10541375. They even set up a poll, was it a UFO, smoke ring from King's Dominion's Volcano ride or global warning?
I know I have worked at King's Dominion for couple summers and even been there with my family, but never seen a ring in the sky, especially above the Volcano. besides that smoke would start to dissipate in the air up there. And though I believe in UFOs (having seen one with my mother years ago going over our back yard in Sacramento), still I wondered if this was due to something simple as atmospheric conditions at the time. No, not a global warning. Just due to something in the atmosphere.
It's still cool, whatever it really is. And even more so, the mystery surrounding it just adds spice to it.
What do you think it is? Do you really want to know, or rather keep it a mystery? Leave some comments to these two questions.

If you want to watch the video at YouTube, here is the link:
http://www.youtube.com/watch?v=O87h-fkTj1Y
Posted by Pamela K. Kinney at 8:18 AM

That is so odd. I have no clue what it is. I don't think a smoke ring would have held together that long. Phylis

I don't know what it could be, but I don't think its an alien space craft or a smoke ring. QtR - Theresa Bane

Didn't you hear the flit and flutter? One of the Heavenly Hosts dropped a contact lens.

Hey Pam- I saw this on the news and thought it might give some writers ideas for a story. What's interesting to me is that no one has been able to give a weather-related reason for the ring (that I know of). That was my first thought.

I agree, a neat idea for some stories, Matthew. I stick to my atmosphere idea, since I know we'd had thunderstorms plus hot weather and more in past few weeks. Yes, i believe in life on other planets and seen an UFO with my mother as a kid, but this just smacks of something like atmosphere and not that or Volcano.
But then again, who knows?

Smoke can indeed behave that way. There are many examples, you can find lots of them by searching "smoke ring" on youtube. There is even a guy dubbed "Burning Man" who created a system for doing this and travels to music festivals, etc. demonstrating the trick. One example is here: