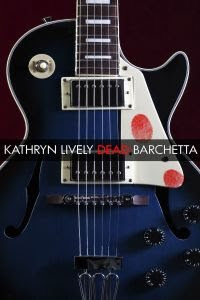 Dead Barchetta is a mystery novel. More than that, its hero is not a gumshoe, but a music tutor by day and tribute band guitarist by night. Matt “Lerxst” Johnston doesn’t have an enemy in the world…so he thinks. And as for women, what rocker doesn’t have them wanting him? Except for one young woman, who tries to kill him by smothering him while he is sleeping in his bed. With mistaken identities (another Matt Johnson in Virginia Beach is found murdered), fear of his grandmother’s special “herb” garden being discovered and investigators, plus the suicide of his would-be killer in his music studio, Lerxst takes off on a bus to New York City to investigate why the girl came to Virginia Beach. And he finds more mysteries to add to the one that he is already investigating. He discovers more about himself and what he needs to do to survive the next attempt on his life, and what a strange trip that it is.
And yes, the book is too a trip, a very enjoyable one. Ms. Lively delivers one rock and roll of a mystery. I look forward to the next Lerxst Johnson mystery by Kathryn Lively.
Buy the paperback for $14: DLP Books AMAZON
View the book video at YouTube
Posted by Pamela K. Kinney at 10:01 AM