Supernatural Friday: Tribute to a Dreamer of Halloween, October, and Martian Landscapes. 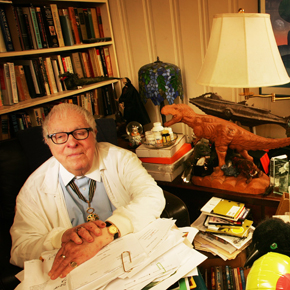 Just a few days ago, a great teller of fantastic tales passed away, leaving us for that October Country beyond. When I heard the news, I was in shock, One of the authors I read since I was younger, who was one of those who inspired to keep on writing, no longer stepped on the ground of the same planet as me?  Memories of the few times I met him at conventions back in assaulted me. No doubt now, he is able to walk along the Martian canals and see the planet with his own spirit that he told tales of in The Martian Chronicles. He will be able to be a boy again in that distant October Country, visit the mysterious carnival come to town, and climb that Halloween tree. Visit the vampires. See if the Illustrated Man still traveled the dusty roads. Taste dandelion wine again with angels.


He left us a legacy of stories that will never grow old, ones we can read over and over. I plan to read them again this summer in his memory. What better tribute I figure. He painted pictures for me with his words. Hook me with a hook better than any hook used by a young boy or girl going fishing along a creek on a hot summer afternoon. There’s comfort in his tales for me. A belief I can travel anywhere. That fantastical things do exist. Most of all, he pushed me even further to pen my own tales. I hope that one day when I step upon my own path to that October Country, I too will have left behind a legacy of words for others to cherish. It’s the only real tribute I feel I should give to him as a thank you for writing for us readers. For entertaining me and others.


Thank you, Ray Bradbury, you will never be forgotten. You will always be there with the others who inspired me years ago: Edgar Allan Poe, HP. Lovecraft, Anne McCaffrey, JRR Tolkien, and Shirley Jackson, plus others.  Most of all, thank you for giving us all the gift of your imagination; a most precious gift indeed. 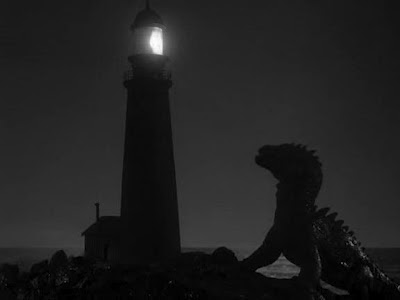 Great post, cute photo of Bradbury and awesome quote. He's so quotable, isn't he?! His Martian Chronicles was the only paperback I've ever stolen. I was in school, there was a book fair and I had no money. That's how badly I had to have it after reading that first page.
I have a sort of eulogy on my blog too. Coincidentally, I had just picked out two of his short stories to teach in my June creative writing class. Now I will have even more reason: to turn on a younger generation (college students) to his great work.

Catherine, I should say his works would make great stuff to read for class assignments.
I never had to steal, as my parents let me buy his books, or I got them out of the library.

I love the pic of the sea monster with the lighthouse... Loved that story! Falling in love with a foghorn...

Ray will definitely live forever through his stories!

Thanks, Lisa. Yes, love the dinosaur with the lighthouse--from Beast From 20,000 Fanthoms, which as you said based off that short story of Ray's. :)