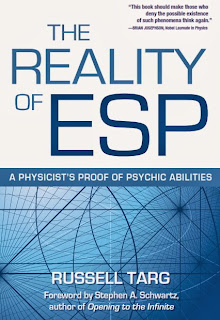 Welcome my guest for Supernatural Friday, Russell Targ. He blogs about why he, a physicist,  tackled the project on ESP research on this stop of the blog tour of his new release, The Reality of ESP.
I started the remote viewing program at Stanford Research Institute (SRI) as the result of my life-long interest in psychic abilities. As a child in New York City I was exposed to magic at Hubert’s Flea Circus on 42nd Street, where I could watch professional magicians up close for as long as I wished. I could then go upstairs to the magic shops in the office buildings and purchase tricks, which I could learn to perform. In my teen-age years, I was a beginning magician, putting on performances for school events and art openings. I would often perform a mind-reading act in which I would pretend to read the thoughts of people in the audience. In the course of this, I would occasionally get a visual impression of the person asking the question and what her house looked like. I could then add some real ESP to supplement what was otherwise just a kid doing a trick. Professional magicians such as The Great Kreskin and Melborn Christopher have told me that they agree, that they have learned to separate the real psychic signal from the mental noise.
This is what I taught people to do the two decades of the SRI program, and what I teach in my new book. By the time I graduated from college I had given up magic, and I was reading the journals of professional ESP research. I knew I would enter this field. But first I had to master a recognized field such as physics.

The first Government support I could find for our ESP research had its origins in April of 1972, on a wind-swept pier at St. Simon's Island off the North Carolina coast.  I had just finished talking to a hundred futurists at a NASA conference on Speculative Technology, about Russian parapsychology research and experiments I had done with my electronic ESP-teaching machine.  And I had my computer (integrated circuit) driven machine with me for the conference – all pretty fancy for 1972. I had been kept longer than I had expected at the lecture hall, answering questions about ESP research, while everyone else had gone off to put on sweaters to counter the chilly evening breeze off the Atlantic.

After my talk, I walked down to the water's edge with Astronaut Edgar Mitchell, rocket pioneer Werner von Braun, NASA Director James Fletcher, science fiction writer Arthur C. Clarke and NASA's New-Projects Administrator George Pezdirtz, who had organized the conference. At the time I was looking for a way to leave my job in laser research at Sylvania, where I had worked for the past decade, in order to start an ESP program at nearby SRI—which would have to be independently funded.

As I stood in my short-sleeved shirt on the pier, I tried to remember a Kundalini meditation I had learned from Mollie back at Columbia, in order to summon up enough warmth to keep from freezing. I struggled not to shiver – successfully I think – while I explained the concepts of contemporary psi research to the men I knew could determine my entire future as a psychic researcher.

In my experience trying to interest people to support ESP research, I have often found that the top people in most organizations know that psi is real and are willing to admit it.  Edgar Mitchell had just carried out some ESP card-guessing experiments from space, and had had a spiritually-transforming experience viewing the earth while returning from the moon. Werner Von Braun told us of his beloved psychic grandmother, who always knew in advance when someone was in trouble and needed help. He was very friendly and supportive to the whole idea of ESP research. (Since then, I have come to realize that everyone will admit to having a psychic grandmother.) I suppressed my knowledge that the great German rocket scientist’s biography was called “I Aim at the Stars,” and contemporary stand-up comedian Mort Sahl said on one of his records that it should have been called, “I Aim at the Stars. But I Usually Hit London.” Fletcher was concerned that the Russians were ahead of us in psychic research, a fear based in part on the recently published book Psychic Discoveries Behind the Iron Curtain.  Only the science fiction writer Clarke expressed skepticism, despite his hugely successful book Childhood's End – which was all about psi.

In the end, with Mitchell's great assistance and continuing help from Dr. Pezdirtz at NASA, physicist Hal Puthoff and I were offered a contract to start a research program if we could find a home for it. As I had hoped, that home turned out to be Stanford Research Institute, where Hal was already employed. The four of us met with Charles Anderson, the broad-minded president of SRI, in his spacious office. Mitchell and Pezdirtz played the NASA card, arguing that this was just the right moment to start an ESP research program and offering their financial help. We were at SRI for the next twenty-three years, carrying out research and applications for NASA, CIA and Army Intelligence. 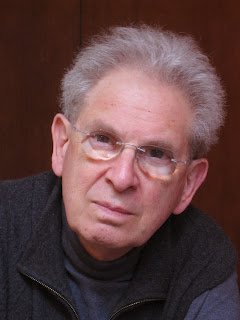 What people are saying about The Reality of ESP by Russell Targ –http://bookpromotionservices.com/2013/09/03/reviews-reality-esp/
Videos
An Open Mind - https://vimeo.com/56568624

The Reality of ESP - full version - Russell Targ on his recent book - http://www.youtube.com/watch?v=ZeUA9Ryp2r0

Russell Targ (remote viewing) on The Hundredth Monkey Radio May 12 2013 Hour One - http://www.youtube.com/watch?v=2Xtd6OGVGRg

The Reality of ESP - Russell Targ on Physics and ESP from his recent book - http://www.youtube.com/watch?v=zhRubnF4dN8

About The Reality of ESP: A Physicist’s Proof of Psychic Abilities:
Nobel laureate physicist Brian Josephson says, “This book should make those who deny the existence of [psychic] phenomena think again.” In The Reality of ESP, Targ presents evidence from the $20 million research program he co-founded at Stanford Research Institute (SRI) in the 1970s. The amazing feats of psychic ability he details include: While remote viewing for the CIA, SRI psychics found a downed Russian bomber in Africa, reported on the health of American hostages in Iran, and described Soviet weapons factories in Siberia. When San Francisco heiress Patricia Hearst was abducted from her home in Berkeley, a psychic with the SRI team identified the kidnapper and then accurately described and located the kidnap car. After leaving SRI, Targ's group made $120,000 by psychically forecasting for nine weeks in a row the direction and amount of changes in the silver commodity futures market – without error! Targ also describes a plan for developing your own psychic abilities.

Excerpt from Chapter 2: Making Friends with the CIA:
Two years later, in 1974, Hal and I were given an opportunity to brief high-level CIA officials about our remote-viewing research with artist Ingo Swann and policeman Pat Price. Day after day, for two years at our lab at SRI, I would ask one of these two great psychics to describe his mental impressions of what it looked like at my partner Hal’s hiding place—at one of sixty randomly selected target locations in the San Francisco Bay Area, all within a half-hour’s drive of our laboratory. The double-blind, carefully judged experimental results of these trials were highly statistically significant with the odds of chance occurrence being one in a hundred-thousand. I was always the interviewer because I don’t drive a car due to my very poor vision. (This is probably one of the reasons I became interested in psychic perception and stage magic at an early age.)
Many of our CIA contacts came from our earlier professional incarnations as laser physicists, during which time we had made various kinds of exotic hardware for them. While I was at GTE Sylvania, the marketing  manager  introduced  me to Dr. Christopher  (Kit) Green, who became the branch chief of the Life Science Division (LSD). In 1974, Kit arranged for Hal and me to brief a large audience of intelligence officers in the very room where the ill-fated Bay of Pigs affair had its inauspicious beginning in the late 1950s. In this closed-door briefing—conducted in a heavily-draped lecture room—we were surprised by how many CIA men stood up to describe psychic intuitions that had come to them over the years or to their psychic grandmothers. Some had stories of occurrences of ESP in the field that had saved their lives. The consensus among the operations-oriented  listeners at the CIA was that  we were “wasting our  time viewing churches and swimming pools in Palo Alto” when we could be “looking at Soviet sites of operational interest.”

To learn more about Russell Targ’s work as the co-founder of a 20 year $25 million research program investigating psychic abilities for the CIA, Army Intelligence and many other agencies at Stanford Research Institute (SRI). get your own copy at http://www.amazon.com/Reality-ESP-Physicists-Psychic-Abilities/dp/0835608840. You can find more information from the virtual book tour for The Reality of ESP at http://bookpromotionservices.com/2013/09/03/reality-esp-tour/ 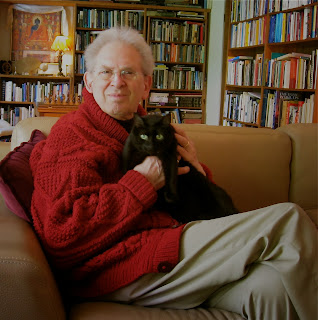 About Russell Targ:
Physicist Russell Targ was the co-founder of a 20 year $25 million research program investigating psychic abilities for the CIA, Army Intelligence and many other agencies at Stanford Research Institute (SRI). This previously SECRET research and applications program is now declassified. Targ has written a comprehensive book describing the remarkable accomplishments of this program.

Amazon Buy Links for The Reality of ESP:

Oh, how wonderful. I've always had an interest in ESP. My mom (not my grandmother, LOL) knew when someone was coming over and clean the house.

My daughter and I have had flashes and knew when something would happen. Before 9/11 I kept having dreams of fire but nothing more. I had those dreams again about fire and a week later a building and house around the corner from me burned to the ground.