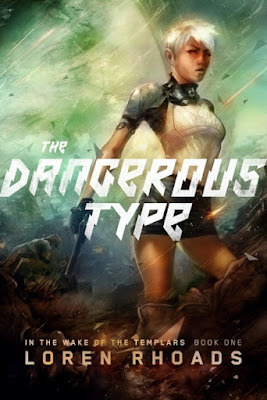 Today, I have a guest blogger, Loren Rhoads. She will tells us all about a true paranormal incident she had. After you read the story, check out her book, The Dangerous Type.

I live in a big old house four doors down from an enormous mortuary that’s been in operation since 1888.  When my husband and I first moved in, weird things happened:  the power surged at odd moments, dimming the lights to a murky brown or making them blaze white-hot; books cascaded off the shelves when no one was in the room; the TV switched itself on and off, talking to itself behind my back.

Since its construction in 1940, our house had only been owned by a single Italian family.  The elderly widow lived alone in it for 20 years after her husband died.  When she finally passed, the house went to her grandson, a flight attendant who didn’t want to live so far from the active center of town.  We thought we got a reasonably good deal on it because we bought it in December.

After we moved in, my husband traveled quite a bit with his band.  Generally I don’t mind being home alone, but the way things kept happening in the corner of my eye or in the next room before I entered made me jumpy.  I would lie awake in the middle of the night, listening to the floorboards creak as if someone paced from the living room to the bathroom and back.

One evening I was settling down in the spare bedroom to watch a movie when the basement door opened on its own.

I’d had enough.  “Hi,” I said aloud.  My voice shook just a little.  My heart beat hard and fast.  “I’m about to sit down to watch The Wizard of Oz.  Would you care to join me?”

I waited for a response, but didn’t hear one.  I shifted over on the sofa to leave room for the ghost.  I didn’t want to touch her.  I’d assumed all along that I was dealing with the ghost of the previous owner, not someone (or several someones) who had wandered over from the mortuary down the street.  If it was only one ghost, I could deal with it.  If we were going to face a continual string of hauntings as people couldn’t move on, I would have a much more difficult time adjusting.

“I don’t mind if you stay in the house with us,” I told the empty room.  “You lived here a long time and must have happy memories here.  In fact, I would like it if you could stay and watch over the baby we hope to have someday soon.  But I ask that you stop trying to scare me.  Don’t sneak up behind me or drop things or open doors, unless you absolutely must.  Don’t make the lights flicker. We all live here now. It would be best for us all to get along.  If you can’t abide by that, I have a friend who can cast you out.”

I pressed the button on the remote and settled in to watch The Wizard of Oz.  I felt much more relaxed than I had in days.

The power still goes out every couple of months, but now the whole block goes with us and we blame PG&E.  The doors stopped opening on their own once we brought the baby home from the hospital.  I’m up quite a lot in the night, but I haven’t run into the ghost.  I like to think that she’s still here, serving as a guardian angel for my daughter.  I wonder if all she wanted was a baby to love.

The Dangerous Type  Book blurb:
The Dangerous Type has been called La Femme Nikita meets Serenity. Former Imperial assassin Raena Zacari has been released from prison and she’s ready to track down the man who trained her to kill. Humans are a minority in a dangerous galaxy peopled by tomb robbers, gun runners, and media pirates. Publishers Weekly accused author Loren Rhoads of bringing grimdark to space opera. Kill By Numbers and No More Heroes, the other two books in the trilogy, will be out from Night Shade before the end of 2015.

About Loren Rhoads:
Loren Rhoads is the author of The Dangerous Type, Kill By Numbers, and No More Heroes. The In the Wake of the Templars trilogy will be published by Night Shade Books in 2015. She is also editor of The Haunted Mansion Project: Year Two and author of a collection of essays called Wish You Were Here: Adventures in Cemetery Travel. Learn more at www.lorenrhoads.com.