Supernatural Friday: If a Vortex Opens in Your Neighborhood; RUN! 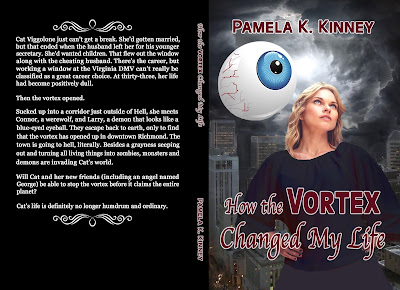 In other words, a whirling mass of something. So, I take Hell wanting to take over the Earth and they use a vortex so they can send demons and other nasty things through it.  Of course, in paranormal circles, they talk about vortexes opening and causing spirits and demonic forces coming through, more than the norm.
VORTEX: A concentrated yet brief area of high electromagnetic energy often found in photographs taken at paranormally active locations. The often appear as sold (opaque) white or silver tubes, rods, or elongated ovals. They can also appear to be braided like a rope or chain (care must be taken to ensure it is not a rope, chain, camera strap, etc…). A vortex is not an entity. However, some paranormal researchers believe a vortex is a momentary doorway or portal to another realm that allows entities and other paranormal phenomena to come into our world. Some researchers also believe vortexes are linked to the Earth's own electromagnetic field which at least in part help determine when these portals open/close. It is also believed that some locations are more prone to having active vortexes due to the alignment of the Earth's magnetic field and local geological structure.

An excerpt from How the Vortex Changed My Life (beginning of the novel) for your pleasure. Enjoy, and no vortexes were harmed in writing this blog.   :- )

Some days, a girl just can't get a break. I wanted to get married, have kids, and a career that I loved. Instead, I married Jeff, who had an affair with his secretary, and divorced me so he could marry the bimbo. As for the kids, he didn't want any. Of course, last week I got the news from his snide mother that his bimbo was pregnant. Of course, she'd always blamed me for us not having kids. As for that career—working a window at the Virginia Department of Motor Vehicles wasn't quite what I'd dreamed about.
At age thirty-three my life was boring. Then the vortex opened.
* * * * *
Friday at the DMV bulged with people. I took money for license renewals and fielded the same old questions I've always gotten about why some folks' licenses were revoked. "Next!" I called out, slumped over my counter, little devils jackhammering away at my brain into a growing tension headache.
My eye on the hands of the wall clock as they drew closer to five o'clock, I swore one more person who wanted to know why her little teenaged darling hadn't passed the road test, I would scream.
When five o'clock rolled around, I escaped to my car. I didn't know why I hurried; no doubt it would be another tedious weekend for me.
The cranky old junk heap did its usual old ritual of coughing and backfiring before finally the engine gave up and turned over. I just wanted to get home, soak in a hot bath, and order a chicken mushroom pizza from my favorite pizza delivery.
But just as I was about to turn into my driveway, a gigantic quadrilateral of swirling neon colors—reds, purples, and hot pinks—appeared out of nowhere right smack in the middle of the street. It created a gale that blasted the neighborhood. Trees uprooted and flew into it, along with a couple of cars, a bicycle, and one yodeling cat. People ducked into their homes. That's when my car decided right then and there to break down. My heart pounded so hard, I thought it might break through my chest. I tried to restart the engine, but it remained dead. I leaped out and bolted for my house. Unfortunately, that path happened to be in alignment with the destructive force. I never made it.

Besides available on Kindle a few days ago, it became available in trade paperback. Find that version HERE.

Book blurb:
Cat Viggolone just can’t get a break. She'd gotten married, but that ended when the husband left her for his younger secretary. She'd wanted children. That flew out the window along with the cheating husband. There’s the career, but working a window at the Virginia DMV can’t really be classified as a great career choice. At thirty-three, her life had become positively dull. Then the vortex opened. Sucked up into a corridor just outside of Hell, she meets Connor, a werewolf, and Larry, a demon that looks like a blue-eyed eyeball. They escape back to earth, only to find that the vortex has opened up in downtown Richmond. The town is going to hell, literally. Besides a grayness seeping out and turning all living things into zombies, monsters and demons are invading Cat’s world. Will Cat and her new friends (including an angel named George) be able to stop the vortex before it claims the entire planet? Cat’s life is definitely no longer humdrum and ordinary.