Review of the Dark Knight 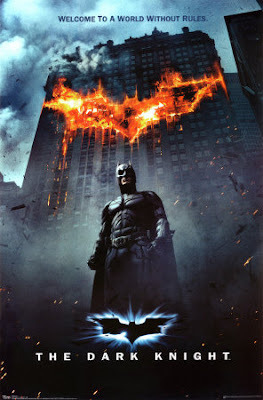 If you love a film with a dark hero, a villian that is truly evil and a hero edging toward becoming a villian then this is the film to see this summer.
In this second film, Batman is heading toward the dark side himself, debating with himself should he or should he not attempt to be like the villian, in order to stop The Joker. In my opinion, Christian Bale is the best actor I have seen that fits Bruce Wayne and his dual personality, Batman, both.
As for Heath Ledger, I suspect many will go see the film because of his death, but they will not walk away denied of a great performance. Heath does what Jack Nicholson brought to the role, a psychotic killer with a penchant for clowning around too. Frightening, dark, he brings a disturbing element to The Joker. Mnay children are afraid of clowns and Heath ledger shows us why we fear them.
There are others in this film who were great. Michael Caine is superb as Alfred, just as he was in the first film. Maggie Gyllenhaal taking over the role of Rachel does fine, bringing a maturity to the role than Katie Holmes did. Gary Oldman as Gorden and Morgan Freeman as Lucias are wonderful. Aaron Eckhart did fine, as zealous District Attorney Harvey Dent, bent on cleaning up Gotham's crime. he even reveal to us that he is not all there beneath the surface at one point. That maybe Two-Face is waiting to burst forth. Though I felt he was a little off.
A local critic where I live said the last 30 minutes shouldn't happen. In a way I agree, they should have added to the first climatic ending and then I think it could have been solved. But unlike him, I think this is a great film.
I give The Dark Knight 4 3/4 dragons.
Posted by Pamela K. Kinney at 9:58 AM