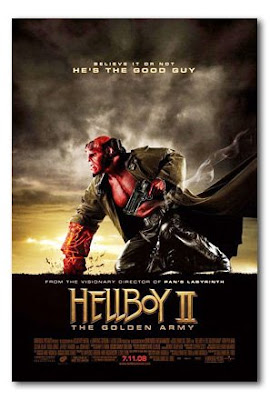 We went and saw "Hellboy 2: the Golden Army" at 2:45PM today. I did like it and my husband enjoyed it. But I felt something was lacking. It felt more toned down than the first movie. In this one Hellboy (Ron Perlman) and the woman he loves, Liz Sherman(Selma Blair) now live together, but not in harmony. The road to love is never more rocky, as he doesn't clean up his place and still has all the cats he has, while she can't even find a place to put her toothbrush, whihch she finds in a open can of cat food.

Add to this mix the leader of the government paranormal organization, Tom Manning who gets replaced with Krauss, who's an spirit or ectoplamic being in a mechanical suit. Blend in a healthy helping of an elvish prince who comes back, kills his father, and is trying to get the last piece of a golden crown and a map so he can find and command the golden army to destroy humankind and you get trouble of frightening proportions. Enough to push Hellboy's and Liz's personal problems on the back burner. Sorta. . . But I won't say more as it will reveal a spoiler.

All this would be great, but for that nitpicking little piece of flatness to the film. A spark that was in the last film isnt there. Its there, just a a tiny flame. And after ironman and with The Dark Knight coming out next week, this film is good, but it will have to work hard to compete money-wise to compete with the other two films. Ironman was wonderful and I suspect The Dark Knight will be up with Ironman, just in a more darker way.

And so I give Hellboy 2: The Golden Army 4 dragons.

If you want to watch the offical trailer and learn more on the film: http://www.hellboymovie.com/

There could be another sequel...