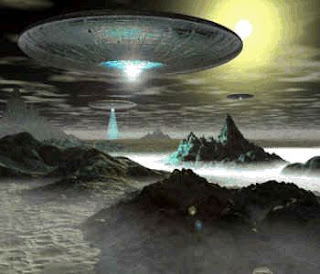 UFOs—the term UFO meaning unidentified flying object–refers to a suspected alien spacecraft. Though the definition can be name for any unexplained aerial phenomena. UFO sightings have been reported throughout recorded history and in various parts of the world. This has raised questions about life on other planets, and about whether extraterrestrials have visited Earth. A major subject of interest, they have become the inspiration behind numerous films and books–following the development of rocketry after World War II.

Though it is said since the 1940s there have been sightings, some documented, some not, there is no doubt that since man first walked the earth such objects have been seen in the skies. There have been suspicions that some text in the Bible and many mythologies could be referring to UFOs or even alien contact. The modern history of UFOs, though, perhaps begins in 1947 with an Idaho businessman and pilot named Kenneth Arnold. As he flew near Mount Rainier in the state of Washington, Arnold spotted a formation of nine silvery crescent-shaped objects flying in tight formation. Later on, he figured that they were forty to fifty feet wide, with their speed hitting at a fantastic 1,200 miles per hour, more than twice as fast as any known aircraft of that time. He described the movements to a reporter as "like pie plates skipping over the water." The reporter coined the term "flying saucers" the next day, and the label stuck.

After that, UFO sightings in our skies exploded. On June 26, four witnesses saw a "huge silver globe" moving along the rim of the Grand Canyon. Not long after that, about two days, an Air Force pilot reported a sighting of six discs over Lake Meade, Nevada. Reports came rushing in from places like Michigan, Ohio, Oregon, Louisiana, Quebec, and Prince Edward Island in far-north Canada. rom 1952 on, UFO sightings piled up for months. Most came from airline and military pilots. An Air Force report declassified in 1985 describes radar sightings involving up to twelve unidentified "targets" at a time near Washington National Airport. At a large peacetime press conference, the Air Force attributed the radar activity to "temperature inversions,” but local meteorologists said it was not. What do you think? 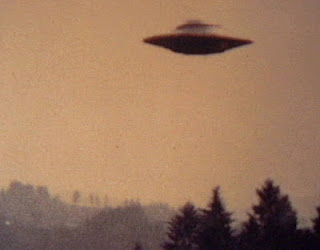 The most infamous story has to do with Roswell, New Mexico, and the crash landing of one of these UFOs. On July 2, 1947, a farmer, Mac Brazel, heard a loud crash during a thunderstorm. The next day, when he was out riding with his neighbors to check on his sheep, he found debris scattered in the field. The debris on the field mostly consisted of I-beams and parchment-like, paper-thin pieces of metal material. The material was very light in weight, colored dull gray, and most of the pieces were six to seven inches in length. Some pieces that were even thinner than paper could not be broken in half, cut, or burned. Mac picked up several pieces of the stuff and went back to his ranch.

The next day, he reported it to the local sheriff, who in turn, contacted Roswell Army Air Field. Not long after, Major Jesse Marcel and others from the 509th Bomb group arrived and went to the field with Brazel. Marcel gathered up some of the debris, even stopping at his home on the way to the base, to drop some pieces off.  On July 8, 1947, a press release went out that the wreckage of a crashed disk had been recovered. This was issued by the Commander of the 509th Bomb Group at Roswell, Colonel William Blanchard. At 11:00 a.m. Walter Haut, public relations officer, finished the press release he'd been ordered to write, and gave copies of the release to the two radio stations and both of the newspapers. By 2:26 p.m., the story was announced on the AP Wire: "The Army Air Forces here today announced a flying disk had been found." Calls began to pour into the base from all over the world. It was not long after that began happening that the flying saucer turned into a balloon. That is when details became murky.

Supposedly, the air base is sealed off, Brazel got taken into custody, and military police close some roads. The same day, it is said that a second crash site was discovered two and half miles southeast of the first. Barney Barnett and 4 archaeologists had stumbled onto the new site only a few minutes before the military got there. At the site they pretended they had found a "pretty good sized metallic dull gray object" and four small alien bodies. The bodies were about four to five feet tall, had large pear shaped heads, small bodies, and skinny arms and legs. They had two large eyes, no ears and no hair, with leathery, pinkish-gray skin. The aliens wore one-piece grey suits. The civilians were escorted out of the area and MPs carried loaded wreckage onto a C-54 from the First Transport Unit. Then it was taken back to base. It was after that that the now famous photo of Marcel with the weather balloon came to light and the story of his discovery not being a spacecraft was told. There have been books written about this and a senator even had the case reopened for investigation. 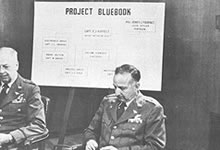 For years, there have been the Air Force Project Blue Book, crop circles, close encounter stories, alien abductions and more, all starting from the first sighting of a flying saucer.  Due to the Condon Report (named for Edward U. Condon, the physicist who headed the investigation), Project Blue Book was dismantled in 1969. You can read more on it in a physicist's article at "Dr. Thornton's Review

Next week's Supernatural Friday, I'll be blogging about alien abduction and cattle mutilations. 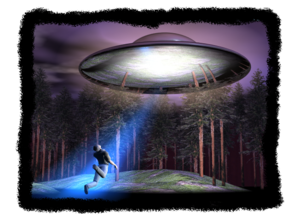 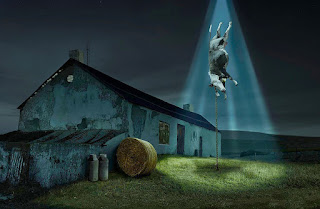