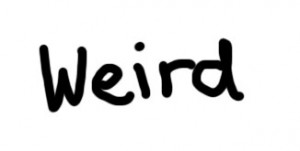 Sometimes some facts are useful knowledge. But then again, there are facts that might be considered strange and true, but not useful at all. Like the state of Alaska is 429 times larger than the state of Rhode Island is.  But Rhode Island has a significantly larger population than Alaska does. Or Montana has three times as many cows as it does people. Would any of this be useful to you? And yet, weird as it may seem, someone might find this information interesting.
Do we really need to know that the United States has 845 motor vehicles for every 1,000 people?  Or that Japan only has 593 for every 1,000 people and Germany only has 540 for every 1,000 people? All that means is a lot of smog to me.
Other maybe useless, but maybe not weird facts:
Jimmy Carter was the first U.S. president to have been born in a hospital.
One survey found that 25 percent of all employees that have Internet access in the United States visit pornography websites while they are at work. (Really? I don't even want to know what they might be doing in their cubicles while looking at the sites!)
There are three towns in the United States that have the name "Santa Claus".
In Tokyo, a bicycle is faster than a car for most trips of less than 50 minutes!
There are 18 different animal shapes in the Animal Crackers cookie zoo!
The king of hearts is the only king without a mustache on a standard playing card!
There are no clocks in Las Vegas gambling casinos!
Tourists visiting Iceland should know that tipping at a restaurant is considered an insult!
Until the nineteenth century, solid blocks of tea were used as money in Siberia!
The two-foot long bird called a Kea that lives in New Zealand likes to eat the strips of rubber around car windows!
It's illegal to drink beer out of a bucket while you're sitting on a curb in St. Louis!
A group of geese on the ground is a gaggle, a group of geese in the air is a skein!
Clinophobia is the fear of beds!
A 'jiffy' is an actual unit of time for 1/100th of a second!
The sentence "The quick brown fox jumps over a lazy dog." uses every letter of the alphabet!
Cat urine glows under a black-light! (I wonder how someone determined this?)
Ancient Egyptians slept on pillows made of stone!
Every time you lick a stamp, you're consuming 1/10 of a calorie!
In Natoma, Kansas, it's illegal to throw knives at men wearing striped suits.
It was once against the law to have a pet dog in a city in Iceland!
Posted by Pamela K. Kinney at 4:33 PM