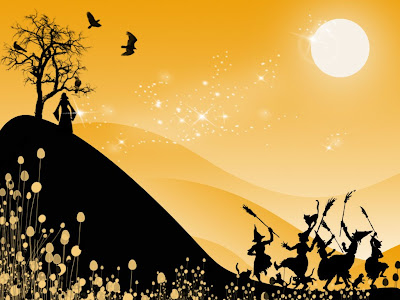 It's October, and Halloween is at the end of the month. But I love celebrating it all month long. Don't you?

What is it about? How did it get started? There has to be much more about it then just a reason for candy, scary movies and scary books. After all, my ghost books and horror fiction sell all year long.

It all started with a Celtic festival called Samhain ( pronounced sow in or sow an), and even a Christian one called All Soul's Day (November 1st). Though some folklorists claim that it goes farther back to a Roman feast of Pomona, goddess of seeds and fruits, or even to a festival of the dead, Parentalia. The Celts on Samhain built bonfires on All Hallow's Eve, where they burned animals and crops as sacrifices to Celtic dieties.

The Celts believed that the veil between the mortal world and the spirit world was thinnest on this one day of the year. That spirits, demons, monsters, and other frightful beings, could enter more easily. Harmless ghosts of ancestors were made welcome by family, while those who meant harm to mortals were warded off.
No doubt this was how the wearing of masks and costumes came about. Someone wanted to get home, or go to a friend's or relative's. They would wear a costume and mask looking like a dark spirit, so that they would be left alone. Over time this changed to people wearing costumes going from door to door in medieval times, this called souling. And centuries later, it became children going from door-to-door, trick-or-treating for candy.

Trick-Or-Treat did not come about officially until possibly the late 20s through 40s. Before that there was vandalism done by kids. Adults wanted a way to stop this, so they thought up an idea of children being allowed to trick or treat, earning candy for their bags at each home. To the joy of retailers who sell candy, this has become a tradition since the 50s. Americans spend 6.9 million on candy each Halloween, making it the second largest commercial holiday.

Today, it is more than just a kids' day of fun, even adults have joined in. Why not?
Just beware of when you go out that night. After all, the worlds of the living and the dead are blurred this very day. And that partner you're dancing with just might not be human....or alive!
Posted by Pamela K. Kinney at 9:46 AM

One of my VERY favorite family photos is of my grandfather and his sister from around 1915 in Newark OH. Their "costumes" are nice day to day wear (she has a paper crown). They're carrying papermache pumpkin baskets.